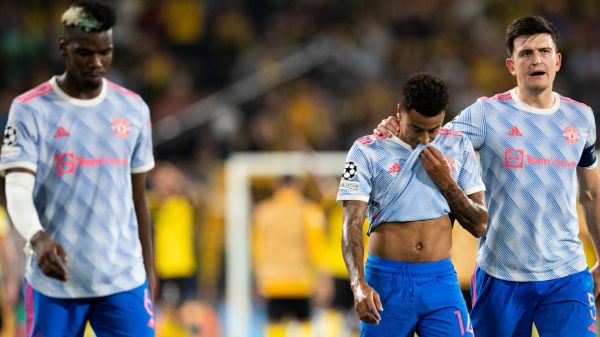 Manchester United ended the season with their lowest ever Premier League points tally after being beaten at Crystal Palace in front of new manager Erik ten Hag.

Former United winger Wilfried Zaha scored the winning goal in the first half, latching onto a through ball and turning Diogo Dalot before drilling a low finish into the corner.
United finished the disappointing campaign in sixth place but clinched a Europa League spot despite the loss – as West Ham were beaten by Brighton – while Palace ended the season in a respectable 12th place.

Zaha’s goal proved to be enough against a rudderless United side playing in front of Ten Hag, who was in the stands at Selhurst Park. The Dutchman is taking over a team from Ralf Rangnick which is bereft of any leadership or confidence.

The departing Edinson Cavani had a snapshot clawed out by Vicente Guaita and the Spanish keeper also brilliantly tipped over United midfielder Hannibal Mejbri’s first-time effort from the edge of the box.

Zaha and Jeffrey Schlupp both had low shots kept out by David de Gea, but United’s number one could do nothing about Zaha’s 37th-minute goal, which nestled into the bottom corner.

United will be thankful a forgettable 2021-22 campaign has finally come to an end after collecting 58 points, their poorest return since 1989-1990.

They finished last season in second place behind Manchester City, but ended this term four places and 16 points worse off than last year.

Ten Hag left his Ajax job early, but from what he saw from his new players in person for the first time in south London on Sunday, he will know he has a monumental job on his hands.

Reports of infighting between players, leaks to the media and complaining of their training schedule under Rangnick have left the Red Devils squad broken.

There could well be upheaval in the playing department too, with Cavani making his last appearance, Nemanja Matic confirmed as leaving in the summer, and first-teamers Juan Mata, Paul Pogba and Jesse Lingard all out of contract too.

After falling behind, United created few chances, with Bruno Fernandes’ form having tailed off particularly badly from last season as his side ended up losing their last six away games in the league.

United have ended with a goal difference of zero – but can take small comfort from qualifying for Europe’s secondary competition, which could lead to the Champions League should they go all the way and win it.

Promise for Palace
Patrick Vieira took over from Roy Hodgson last summer and his first season in the English top flight can be classed as a success, improving on Palace’s 14th-place finish from last term and reaching the semi-finals of the FA Cup.

The Eagles are a vibrant team in attack and are marshalled at the back by solid Danish centre-back Joachim Andersen, who contributed six clearances and attempted more passes (44) than any team-mate against United on Sunday.

Conor Gallagher, with his all-action style of play, will leave a huge void in the middle of the park now his loan from Chelsea has ended. The England international had more touches (63) on the ball than any other Palace player, as well as having 18 duels and winning five fouls.

Palace can go into the summer with plenty of promise, hoping acquisitions in the transfer market may push them towards a European position next season.