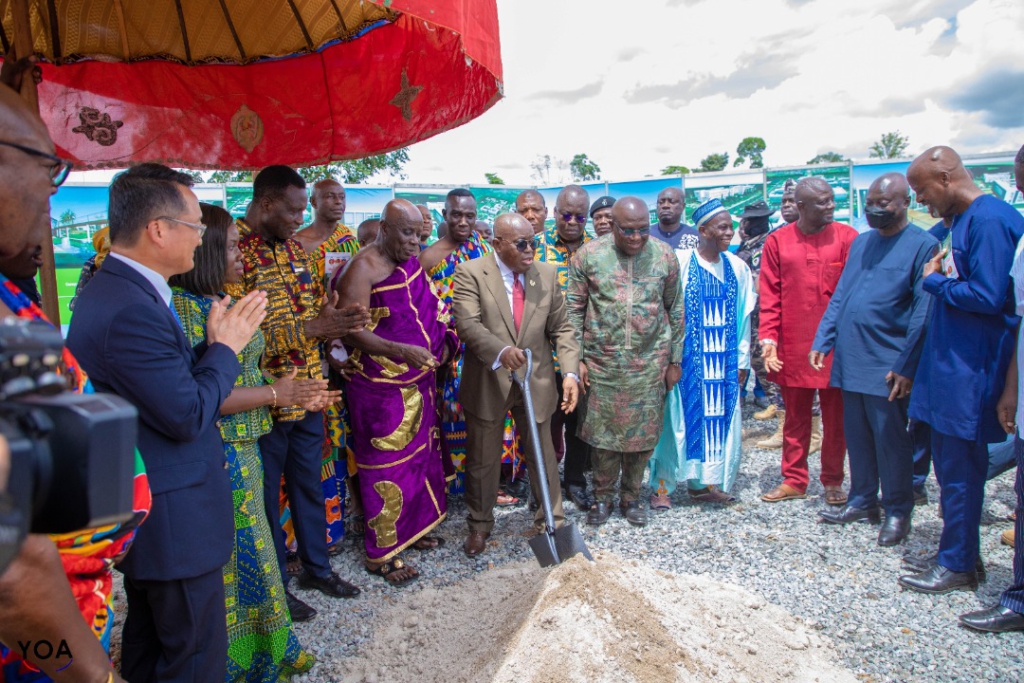 President Akufo-Addo, on Friday, cut a sod for the commencement of the construction of the University of Engineering and Agricultural Sciences (UEAS), at Bunso, in the Eastern Region.

The project costing $90 million is funded by the Export-Import Bank of Korea and the Economic Development Cooperation Fund (EDCF) of the Republic of Korea and is expected to be completed in two years.

Upon completion, UEAS will be the second public University in the Eastern Region, with the first being the University of Environment and Sustainable Development at Somanya.

Speaking at a durbar of chiefs and people before the groundbreaking ceremony at Bunso, Nana Akufo-Addo, thanked the Korean Government for its support of the development of the country and assured them of Ghana’s determination to deepen and expand the bonds of friendship between the two countries.

The President said the current state of affairs in the world hinges largely on science and technology towards the management and conservation of natural resources in the form of energy, industry, agriculture, medicine and health, clean air and water, transportation and sanitation etc.

“So, it is obvious that to be a part of this modern world, there must be science and technology elements at all levels of the development process. This means that a country’s development depends on its ability to understand, adapt, produce and commercialise scientific and technological knowledge in ways appropriate to its culture, aspirations and level of development,” he added.

He explained that that will help shape the fulfilment of the national dream, which was to meet basic challenges of survival like providing food, shelter, clothing, health and security for the people, and creating the wealth that would guarantee the prosperity of the present and future generations.

“The establishment of this University is also part of the Government’s response to the current national preoccupation with food security. The University will provide leadership in teaching, research and public outreach across several fields, and will help address problems that affect our food security, and enhance future competitiveness of Ghana’s industries in a sustainable manner,” he said.

The President recounted the introduction and implementation of various programmes and initiatives during the past five years all geared toward increasing access to Science, Technology, Engineering and Mathematics (STEM) education with the goal being to ensure a target of a 60:40 science-humanities ratio, and also educate a critical mass of the Ghanaian population for science-related jobs, which will define their future employability.

He announced that the nation’s Gross Tertiary Enrolment Ratio (GTER) which was 18.8 per cent as of 2021 had increased significantly to 20 per cent this year and he pledged to work very hard to ensure that the nation made many gains in that direction.

Nana Akufo-Addo said “I am, thus, happy to note that this year’s enrolment of TVET students in Senior High Schools has reached record levels – forty-four thousand (44,000) students, representing a one hundred per cent increase over the 2021 enrolment figure.

The Korean Ambassador to Ghana, Lim Jung-Taek, lauded the President for the effort he was making toward the transformation of the nation’s economy through education.

He pledged to continue supporting the development of the country to improve the standard of living of the people through improvement in infrastructure development in the country.

The Okyenhene, Osagyefo Amoatia Ofori Panin, thanked the government for the project which would go a long way to bring development to the people in the area and the rest of the country.

The President during the presentation of the State of the Nation address in Parliament on 30th March 2022, hinted at plans and steps being taken to turn the Bunso campus of the University of Environment and Sustainable Development into a fully-fledged independent University dedicated to the study of Engineering.

It was based on the promise made to the nation that he proceeded to cut the sod for the commencement of work for the new university expected to be completed within 24-months.