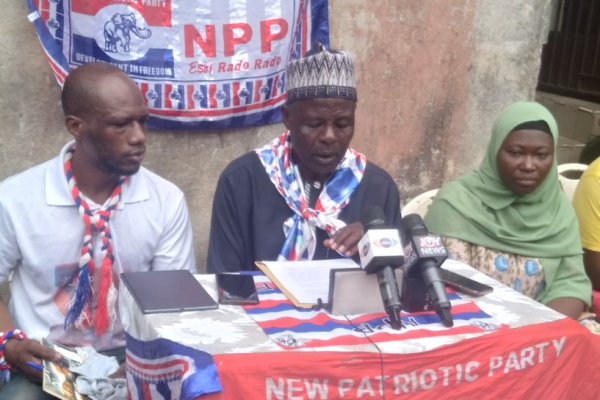 Kumasi, May 19, GNA – A group of supporters of the New Patriotic Party (NPP) in the Asawase Constituency calling themselves NPP Zongo Opinion Leaders, have called for quality leadership in the Ashanti region to improve the party’s chances of retaining power in 2024.
They believe the party’s victory in the next election depended largely on the performance of the Ashanti region hence it was imperative for delegates to select the right people to lead the party ahead of the crucial general elections.
Alhaji Shuaibu Musah Shariff, Leader of the Group, addressing the media at a press conference in Kumasi, said the leadership style of the current Regional Chairman, Mr. Bernard Antwi Boasiako, left much to be desired.
He said it had become necessary for them as members of the party in the Zongo communities to add their voices to calls for proper management of the party in the region, as key stakeholders of the party, to avert a possible abysmal performance in 2024.
“The quality of leadership of the current regional executives is not the best compared to previous ones and we are really scared of the consequences if nothing is done to improve the situation,” he stated.
Alhaji Shariff who is also a Former Regional First Vice Chairman of the party said the region was the heartbeat of the party and that any crisis in the region could affect the overall performance of the party.
He said the drop in percentage from 76.22 per cent to 71.64 per cent in 2016 and 2020 respectively was a true reflection of the current executives in the region.
He expressed concern about how the recently held polling station and constituency elections were marred by confusion all over, leading to some aggrieved members resorting to the law courts to seek redress.
“We don’t want a repeat of the mistakes that almost cost us the 2020 election to resurface again else our quest to break the eight would be a mirage,” he cautioned.
He further added that, “It is for this fear that the NPP Zongo Opinion Leaders are adding our voices to the clarion call to fix the situation as soon as possible.”
He called for the leadership to take steps to bring back all party members who had been suspended back to the party, adding that politics was a game of numbers.
The party’s chances of winning the 2024 election, according to him, required a formidable leadership in the region and called on the delegates to prioritise the interest of the party when casting their votes in the upcoming regional election.