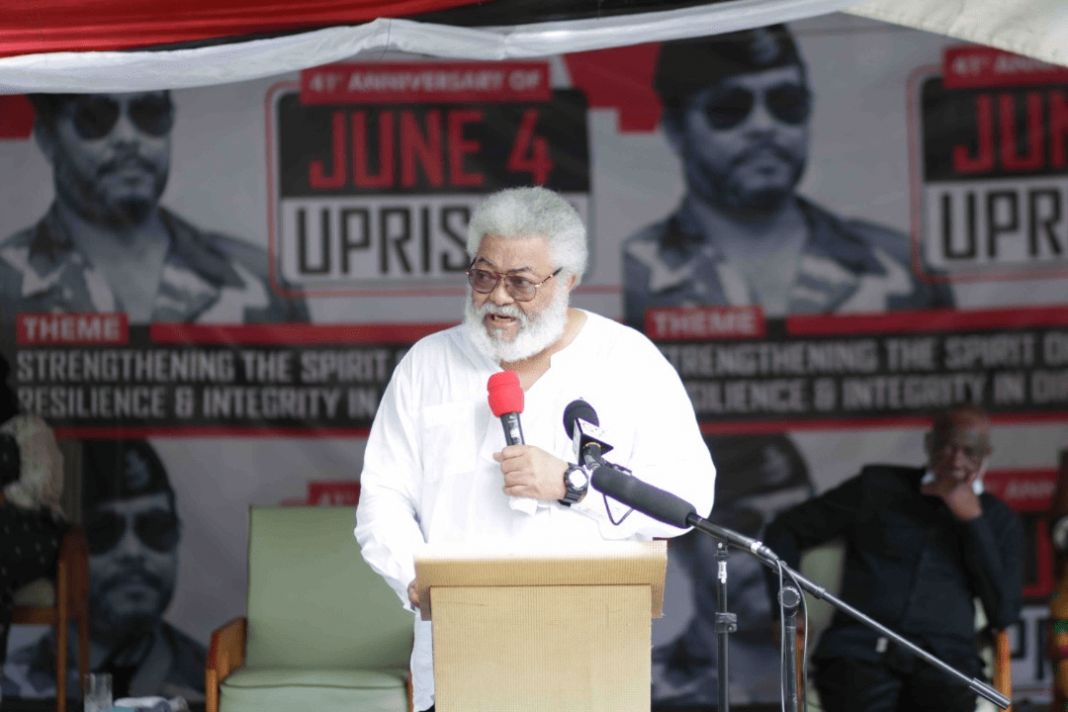 The J.J. Rawlings Foundation has announced activities in commemoration of the 43rd anniversary of the June 4 uprising.

An exhibition and theatre performance has been scheduled for Saturday, June 4, 2022.

This was contained in a statement from the office of the late Rawlings and signed by Kobina Andoh Amoakwa.

Today marks 43 years since the May 15, 1979 Mutiny which took place under the dire straits pervading in Ghana at the time; deep-seated corruption, political mismanagement, arbitrary price increases, hoarding, indiscipline and abject poverty.

A group of military officials mainly drawn from the Ghana Air Force, led by young Flt Lt Jerry John Rawlings staged a mutiny against the government of the day to bring an end to the dark days in which Ghana found herself.

The mutiny was abortive and a defiant Flt Lt Rawlings and his compatriots were arrested.

Events of the trial that ensued, inadvertently highlighted the rot permeating the country then. The Director of Public Prosecutions in filing his case, unwittingly trumpeted the circumstances that caused the uprising, leading to national support for the cause:

Mr. President, the first accused had for a long time felt disillusioned about the injustice in our society, more particularly under the Acheampong regime: and so when in July 1978 the SMC was reconstituted with the removal of Mr. Acheampong as Head of State, Jerry John Rawlings thought things were going to be improved. When he realized that there were no improvements in the general conditions of life he was struck with dismay and lamented over what he termed “the tarnished image of the Armed Forces.” He regretted that at a time when the Military Government is due to hand over to civilian government, the Military Government had done practically nothing to improve the image of the Armed Forces.”

In spite of the fact that he was speaking in favour of the prosecution, the applause in recognition of Jerry John Rawlings and his colleagues, was spontaneous. The arrested conspirators clearly stood for the will of the people and the trial was further highlighting their desire to defend the will of the ordinary people.

The prosecution further won support for Flt Lt Rawlings and his colleagues when one prosecution witness confessed Rawlings had declared he was ready to die for the rest of his colleagues. That led to the famous, “Leave My Men Alone!…I’m Responsible For Everything”, banner headline of the Daily Graphic.

Much later, President Rawlings often explained that May 15 was abortive because the anger of the lower ranks and in the country, was so intense he had to “calm it” by undoing the success of the uprising to ensure the resentment that would have been unleashed was subdued.

Serving as an antecedent to the June 4 uprising, May 15 brought the difficulties facing the nation to the fore and challenged the youth, particularly student groups and the junior ranks of the Armed Forces and the country at large, to take their destiny into their hands and change the course of Ghana’s history.

June 4, 1979 was a spontaneous reaction to the events of May 15 and the trial of the accused that ensued. It reflected the will of the people, and while many have chosen to distort the narrative, the national call for drastic change was overwhelming.

To commemorate this period, The J.J. Rawlings Foundation will organise an exhibition and theatre performance on Saturday, June 4 in remembrance of the historic event.