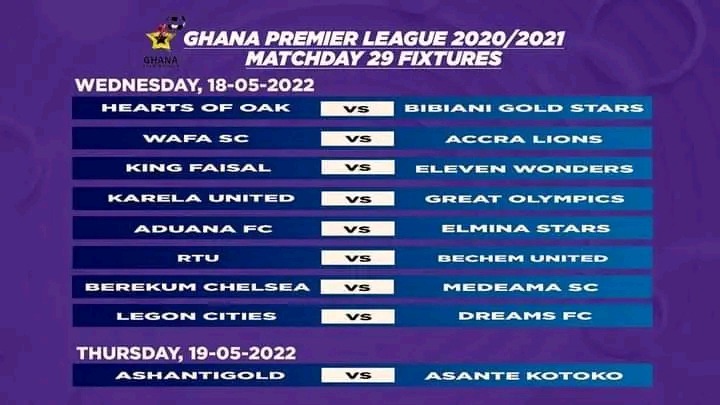 Ghana Premier League, GPL champions Accra Hearts of Oak will be home to Bibiani Gold Stars as the competition continues with midweek thrills today and tomorrow.

This game will be one of eight matches to be played in the GPL as the competition continues with the Matchday 29 fixtures.

Hearts of Oak will be huge favourites to win this fixture as they continue with the defence of the title they won last season.

Berekum Chelsea will look to make the most of the home conditions when they welcome Medeama SC to the Golden City Park in Berekum.

They have been very formidable at home since they joined the Elite Division in Ghana, and, they will fancy their chances of getting the three points against the Yellow and Mauves.

Relegation strugglers King Faisal Babes and Techiman Eleven Wonders will square off at the Baba Yara Stadium in Kumasi as they contest for the three points.

A win for either side will aid them in their quest to survive relegation and, no quarter of an inch is expected to be given by either side in this fixture.

Another relegation-threatened side WAFA will look for some respite when they host Accra Lions at the Red Bull Arena at Sogakope.

The academy lads have been a pale shadow of their form of last season which saw them finish third on the table.

They have an opportunity to make amends with six matches to end the campaign and, they will look to begin today with a win over the league debutants.

Aduana FC are the odds on favourites to collect the three points when they host bottom side Elmina Sharks at the Nana Agyeman Badu I Park, Dormaa Ahenkro.

Sharks, are all but condemned to relegation after failing to impress this season in the ongoing competition.

An exciting fixture will be in store for fans in the Western region when Karela United hosts Great Olympics this afternoon in Anyinase.

The game will be played at the Crossby Awuah Memorial Park where Karela United has been very formidable at this season as they come up against the Wonder Club of Ghana.

Real Tamale United, RTU will welcome second placed Bechem United to the Aliu Mahama Sports Stadium in Tamale where they will need the three points to aid in their survival hopes.

Bechem United are eying to win the GPL title and, they will offer a very stern resistance against the Pride of the North.

Legon Cities will host Dreams FC at the El-Wak Military Sports Stadium in Accra in a game they will look to win to climb up the table.