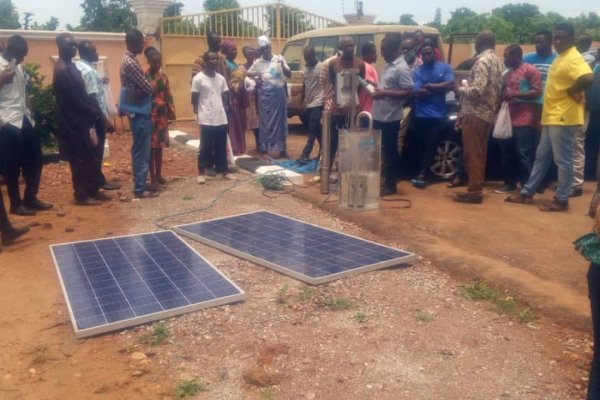 Sawla, (SR), May 16, GNA – The uncertainties in rainfall amounts and distribution present risks of crop failure in recent times, Mr Obed Kofi Tuabu, a PhD candidate at the Faculty of Agriculture, School of Engineering, University for Development Studies (UDS) Tamale, has stated.
Besides, the soils in Northern Ghana mostly lack organic matter due to bush burning, while fertility levels are generally low even though it is moderate with some communities showing higher levels than others.
Mr Tuabu said this at a demand and supply linkages solar pumping for irrigation value chain actors’ workshop at Sawla in the Sawla-Tuna-Kalba District.
The GIZ organised the forum for 62 farmers to share knowledge about irrigation in the Savannah Region, share the new insights on irrigation technologies, products and services, develop a plan to establish and facilitate demand-supply linkages for solar powered irrigation technologies and services among others.
He spoke on “Irrigation and soil management for vegetable farming in the Savannah Region” and encouraged farmers to endeavour to improve on soil structure to increase nutrients uptake in the soil to help in the enhancement of crop yields, and improve water holding capacity to recover soil health and boost farm profitability.
Mr Tuabu said the Savannah Region was endowed with water sources from the Black Volta and White Volta Rivers and their tributaries, which could be used for irrigation purposes and appealed to farmers to embrace the project, as irrigation offered the opportunities that leverage the risks of crop failure.
Mr Desire Naab Dickson, a Research Technician at the International Water Management Institute, noted that permanent access to cultivated land and access mainly to surface water resources were challenges to farmers.
He said uncertain access to cultivated land, farm destruction from animals especially Fulani herdsmen invasion and annual floods and illegal gold mining also limits interest in irrigation farming
“Inappropriate irrigation practices and application, low extension services on solar based irrigation systems and inadequate knowledge about solar technology for irrigation, were impeding investment in solar based irrigation”, he said
Mr Dickson appealed to the district assembly to work closely with farmers to acquire permanent sources of land and water for them to undertake solar energy irrigation farming to boost crop and vegetable production.
“The limited access to agricultural inputs and services, including government support and subsidies, the uncoordinated interventions for value chain development by the government, non-governmental organisations and private sector leading to duplication, were challenges impeding investment in solar based irrigation system’, he said.
Mr Dickson noted that poor market bargaining power, poor collective marketing tradition and low vegetable production limiting market power were also a hindrance.
He said much attention had been given to technology-dominant supply while neglecting social and managerial innovation addressing other social and economic dynamics.
The lack of the supply of innovation and service packages that could be tailored to different types of customers and their conditions, the lack of comprehensive interventions addressing the value chain dynamics and the lack of establishing rural distribution networks for solar pumps and accessories were major challenges affecting the system.