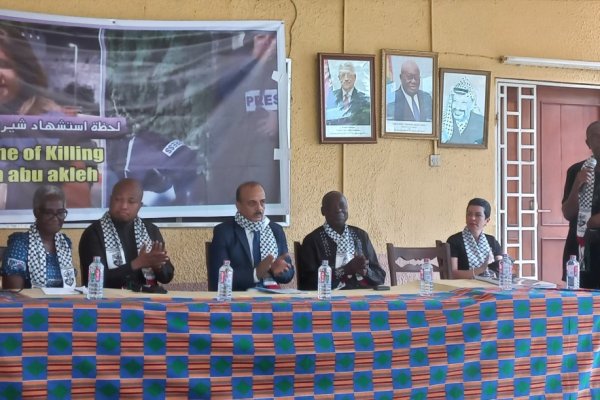 Accra, May 17, GNA – The Embassy of the State of Palestine to Ghana says it welcomes the broad international condemnation of the killing of Aljazeera Journalist Shireen Abu Akleh and demanding that Israel be held responsible.
The Palestinian Ministry of Foreign Affairs and Expatriates said, “despite the live testimonies and the evidence documented by audio and video that proved that Israeli forces committed the crime of executing the martyr Abu Akleh, the Occupying State (Israel) continued its disinformation campaign.”
It claimed : “The Israeli occupation was spreading lies and fabrications with the aim of absorbing wide official and popular reactions to the crime, especially whenever it notices wide international reactions” to the act.
Israeli forces are suspected to have shot dead Al Jazeera’s journalist Shireen Abu Akleh in the occupied West Bank, according to the Palestinian Health Ministry.
Abu Akleh, a longtime TV correspondent for Al Jazeera Arabic, was killed on Wednesday while covering Israeli army raids in the city of Jenin in the northern occupied West Bank.
She was rushed to a hospital in Jenin in critical condition, where she was declared dead shortly after, at 7:15am (4:15 GMT), the Palestinian Health Ministry said.
Abu Akleh was wearing a press vest and was standing with other journalists when she was killed.
Another Al Jazeera journalist, Ali al-Samoudi, was also wounded by a bullet in the back at the scene.
Israeli riot police at the funeral of the slain journalist pushed and beat pallbearers, causing them to briefly drop the casket in a shocking start to a procession that turned into perhaps the largest display of Palestinian nationalism in Jerusalem.
Mr Abdulfatah A. K. Alsattari, Ambassador of the State of Palestine to Ghana, while narrating circumstances leading to the killing of the Aljazeera Journalist at a media briefing on Monday said, it was absurd for some persons to conceive the thought that Palestinians killed their own.
He said an investigation by Israel, however, transparent, would not be acceptable as thousands of such cases had gone uninvestigated or improperly done, and, therefore, called for an impartial and independent investigation by the International Community.
The Ambassador condemned attacks on pallbearers and others during the funeral of the journalist, describing it as “terrible”.
He said, “they were afraid of her when she was alive, they must still be afraid of her even in death, and perhaps the over 40,000 people – Muslims and Christians – who showed up at the funeral.”
“Shereen lived in our heart; we saw her on the TV every night when she reported, ” he said in a doleful voice.
Mr Benjamin Kumbuor, former Minister for Defence, who knew the slain journalist and had met her on three separate occasions, attending a Catholic Service together in Ghana, said “I got attracted to her because of her deep insight in international law…”
“There is one statement she made in one of our interactions which has been puzzling me since news of her death broke – If you do not fight impunity from a distance, you should not be surprised to find impunity on your door steps the next day,” he said, adding that in her quest to fight impunity, she had to pay the highest price for it.
Mr Kumbuor said for those who encountered her, they had lost an internationalist, a comrade and someone who had a human feeling for all struggling and oppressed people of the world.
Mr Samuel Okudzeto Ablakwa, Member of Parliament for North Tongu and Ranking Member of the Foreign Affairs Committee, said Shireen Abu Akleh’s journalistic work was admirable as she showed respect for fact, tremendous courage and distinguished herself in war reporting – an area otherwise perceived as preserve for male journalist.