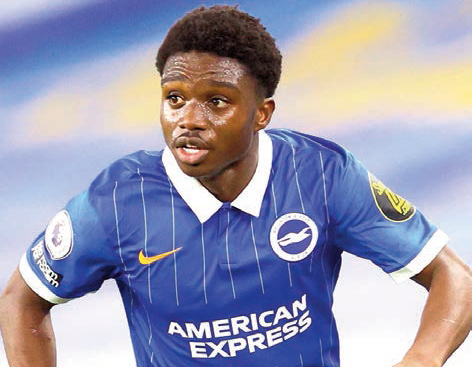 Brighton & Hove Albion coach, Graham Potter, has counselled Tariq Lamptey to follow his heart when contemplating whether or not to relocate from England to Ghana.

The Brighton right-back has represented England, his home nation, at several levels below senior, including two appearances for the under-21s.

Potter said: “Regardless of Tariq’s situation, playing in a World Cup is going to be fantastic for any player. That’s something for him to consider, but it’s more about where he feels in his heart he should play. That’s up to Tariq, I’ll support whatever decision he makes.”

Lamptey, who joined Brighton from Chelsea in January 2020, is a Ghanaian citizen through his parents.

Potter added: “Obviously, I’ve never had to think about that decision. I’d like to think it’s more about how he feels in terms of who he wants to represent. There will be a family consideration.

“I don’t think you take that decision necessarily from a career perspective, it’s more about what feels right for him as a human being and as a footballer. That’s complex.

“We are definitely here for him if he wants to speak about anything or ask any questions. It won’t be us steering him either way, it’s a case of listening to him, what he thinks, and to make sure he knows he’s got our support.”