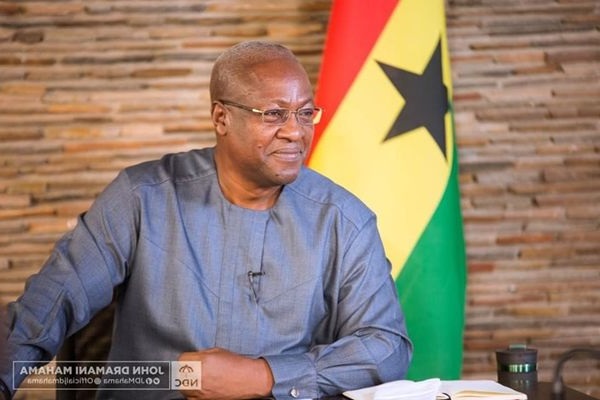 Former President John Dramani Mahama who suffered humiliating defeatd in the 2016 and 2020 general elections and has officially expressed interest in leading the opposition National Democratic Congress into the 2024 elections.

According to him, however, this is subject to the party allowing him to contest.

Mr. Mahama said that he is unperturbed if the party picks a different aspirant since the main priority is to win the 2024 polls.

“My country has given me so much, educated me, and made me who I am. So if the party lets me stand, I will,” NBS TV quoted John Mahama as saying.

“The main priority is winning the election come 2024, and if the party decides that I or someone else should stand, it’s all fine with me,” he added.

Barring any last-minute changes, the NDC is expected to elect its flagbearer for the 2024 elections early next year according to a roadmap for the party’s internal elections.

Mr. Mahama will be contesting with the former Finance Minister Dr. Kwabena Duffour who is reportedly lacing up his boots to join the flagbearership race of the NDC as well as former Metropolitan Chief Executive of Kumasi, Kojo Bonsu.

However, many political scientists have predicted that the pendulum will swing in favor of Mr. Mahama.

Meanwhile, a recent EIU report has tipped the NDC as likely to win the ensuing general elections.

It, however, suggested that the NDC should revitalize its prospects with a fresh candidate besides John Mahama.

“The next parliamentary and presidential elections are due in 2024.

Under constitutionally mandated term limits, the incumbent President Akufo-Addo, cannot run for a third term. The former president, John Mahama, is reportedly considering running again, but we expect the opposition NDC to try to revitalize its prospects with a fresh candidate.

“Our [EIU] baseline forecast is that ongoing public dissatisfaction with the slow pace of improvements in governance—such as infrastructure development, job creation, and easing of corruption—will trigger anti-incumbency factors and push the electorate to seek a change,” the report emphasized.

Bawumia Speaks On Ghana’s Return To IMF On July 14