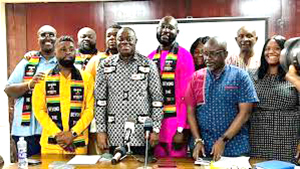 The Ghana Tourism Authority (GTA) has signed a Memorandum of Understanding (MoU) with the Afrochella team to strengthen the already existing conversation on promoting Ghana’s tourism potentials.

Afrochella is a Ghana-based festival designed to highlight and elevate thrilling and thriving millennial talents from and within Africa.

The festival features festive celebrations of Ghanaian culture in the form of art and fashion installations, live painting, the best of African cuisine, and live performances among others.

The MoU, under the directive of the Minister of Tourism, Arts and Culture, is also to allow the two institutions to collaborate and support each other to attract more tourists into the country annually, and work towards making Ghana the preferred tourism destination in the world.

Dr. Ibrahim Mohammed Awal, the Tourism Minister, was optimistic that this MoU will contribute to his outfit’s target of bringing in two million people into the country annually.

Dr. Awal said, “Since the inception of the Afrochella Festival six years ago, you have demonstrated a lot, and we know that you can [help us] achieve this target.”

Mr. Abdul Karim Mohammed Awal Abdullah, Chief Executive Officer, Afrochella, expressed his enthusiasm after signing the MoU with GTA by stating that, “This year, our target is to have over 20,000 people come to the festival, so with this partnership and the minister outdooring us as tourism ambassadors, we are hopeful of achieving this target and even more, by bringing more attention to the festival and [to] Ghana as a whole.”

He expressed appreciation to the GTA for the continuous support over the years, and assured that this year’s festival, which would be held for two days, would drive into the country the right people to invest in the country’s economy.