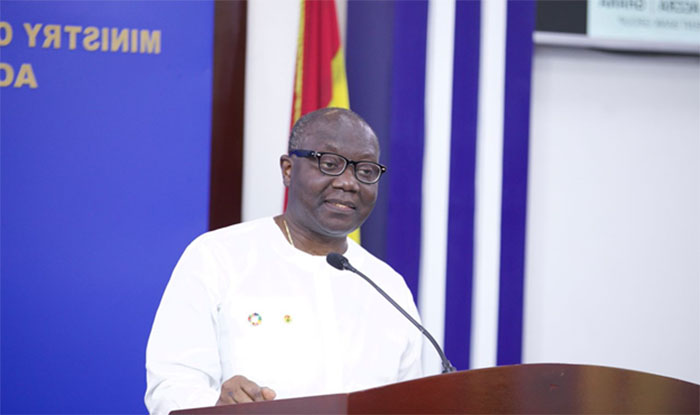 MINISTER OF Finance, Ken Ofori-Atta, has stated that the government is truly excited about the Electronic Transfer Levy (E-Levy), which is a new tax handle to look at issues of curing option failures in increasing the country’s revenue mobilisation.

According to him, the E-Levy is also part of efforts in gradually getting technology into the Ghanaian economy in which people do not use just cash, because it is much easier to continue the move for technology.

Speaking at a press briefing organised by the Ministry of Information in Accra yesterday, Mr. Ofori-Atta said, “It is an exciting period of having a structural solution to revenue mobilisation in a way that we haven’t had before.”

“We are, as a matter of fact, running a budget deficit which essentially could not be addressed. Our revenues are below our expenditure, and that is why the intervention of the E-Levy was so important,” he explained.

The Finance Minister asserted that he was very confident that the E-Levy “opens a whole new visa for our tax handles in a way in which all Ghanaians will also be paying something.”

“We are truly excited about this new tax handle to look at issues of curing option failures in increasing our revenue mobilisation, and getting technology gradually into an economy in which, really, people don’t use just cash, because it’s much easier to continue our move for technology,” he emphasised.

He acknowledged that there could be challenges in the implementation of the tax since it involves technology, saying, “I don’t know of any programme which involves technology that will not have teething problems. But certainly, the cataclysmic pronunciation by our people on the other side is not happening.”

“I think we pretty much have it under control as much as we can. We started on May 1, and we were blessed with that being a period of holiday – three, four days, and so we saw the issues and began to tackle them.

“There will continue to be some technical issues, but certainly it will be meager than what was pronounced for us,” he asserted, and added that he was of the view that Ghana is moving forward.

“We have discovered a tax handle which does two things – one from GHȼ78 billion of mobile money transfers to maybe almost a GHȼ1 trillion last year, and therefore you begin to see how e-commerce and technology become effective that will be good for the country.

“And secondly, the sense of unfairness, some 2.4 million people are paying taxes because they are in the formal sector and nobody else is paying, bringing everybody else onboard as small as it will be,” he stated.

“But we also were clear on the issue of regressive taxes, which says that you don’t over tax the poor, and so the first GHȼ100 is not being levied, and that is about GHȼ3,000 a month in effect,” minister said.

He continued, “We know our salaries are not that high. So truly, most of those people that advocate that it is regressive taxes are not affected at all. And if you have GHȼ200, I am sure you can do that in two days, and therefore, there will be a zero impact.”

Mr. Ofori-Atta disclosed that the government would soon roll out a pilot phase of the property taxes to double its revenue to GDP ratios from the region of 13% and 14%.

Mr. Ofori-Atta insisted that Ghana would not return to the International Monetary Fund (IMF) for policy credibility and support to deal with the current challenges of the economy.

He noted that the Bretton Woods Institution is aware that “Ghana is completely in the right direction with regard to the internal measures and policies introduced to deal with the fundamental issues affecting the economy.”

According to him, the Akufo-Addo government has put in place proper measures to bring the economy back on its feet, explaining that even though Ghana is a member of the fund, the nation has the capacity to think through the consolidation exercise and be self-disciplined, without requiring IMF.

“We are members of the fund. There are two major points of interventions that we have from the fund. One being the advice that we get because of the phenomenal expertise that the fund has and secondly, these programme interventions which bring us some resources,” he noted.

“I think, if you see from the budget that we constructed for 2022, and the subsequent announcement that we have done, clearly, the issue of Ghana having the capacity to think through the consolidation exercise exists. Also, discipline itself with regards to the 20%, and that we have shown clearly (sic).

“We have committed to not going back to the fund because in terms of the interventions and policy we are right there. The fund knows that we are completely in the right direction. The issue is, validating the programmes that we have put in place and then, in my view, supporting us to find alternative ways of financing or refinancing our debt – thus re-profiling it,” he stressed.