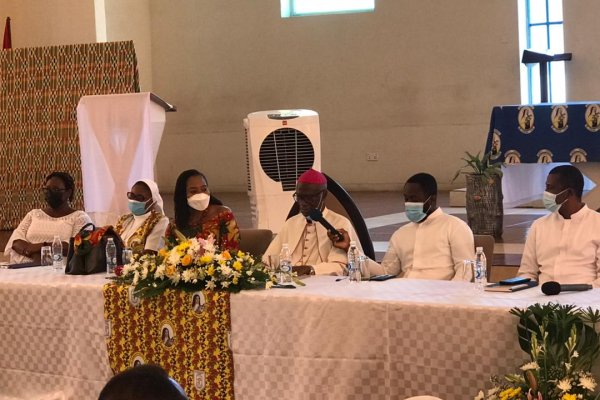 Accra, May 13, GNA-The Co-founder of Family Health University College, and Chief Medical Director of Family Health Hospital, Dr.
Susu Bridget Kwawukume has appealed to Old Students of St. Theresa School at Awudome to support their Alma Mater (St. Theresa School).
Speaking as a Chairperson during the launch of the 60th Anniversary ceremony of St. Theresa School at Awudome in Accra on the theme: “60th Years of Quality Education, The Way Forward”, she called for quality of education for people occupying top positions in the country.
Dr. Susu Bridget Kwawukume who was among the Old Student of 1966 Group of St. Theresa School, thanked the organizers for a great work done and entreated the school management to continue to protect the integrity of the school.
She called on all Old students both home and abroad to support as the school, prepared to celebrate its 60th Anniversary.
The school library and Assembly hall Dr. Susu indicated, needed refurbishment to make it attractive and competitive and appealed for support towards the purchase of a bus to facilitate their movements and urged all Old Students to remember where they started.
The Special Guest of Honour and Metropolitan Bishop of Accra, Most Rev. John Bonaventure Kwofie, praised the school for producing personalities whose contributions were making the country to move in the right direction.
He re-echoed the need for the school to work with integrity all the time and called on the Old Students to give back to the school.
The Anniversary Planning Committee Chairman, Mr. Henry Daniel Quist on behalf of other members, assured of their commitment and preparedness to organize a successful 60 years Anniversary.
In September 1962, Fr. Al. Turbek and Sister Francetta opened St. Theresa’s Preparatory School in two (2) newly built classrooms, located at what later became known as Awudome Roundabout.
In the course of the same year a third room was added to the same building.
In August 1963, work was started on a second block of three (3) classrooms –concrete foundation and floor, supported by a wooden structure above.
In that same year, an announcement was made during that year’s Harvest of the Holy Family Parish – Mataheko, to parishioners living within Kaneshie and its surroundings areas to start a new parish on the site of the then St. Theresa’s School.
Kaneshie was at that time, considered as an outstation of the Mataheko Parish, which in turn was part of the original Sacred Heart Parish at Derby Avenue.
It was however, a second announcement that prompted the late Mr. William Luke Laast to take a decision on the call of creating a new parish.
Mr. Willie Laast called a meeting at which Mrs. Frances Sallah (Mama Miedoafe II), Mr. & Mrs. J. P. Addei, the late Mrs. Marian Wood and her sisters Mrs. Florence Dyson, Mrs. Catherine Ankomah-Sey, the late Mrs. Elizabeth Maison, Mrs. Florence Laast, the late Mrs. Rose Painstil, the late Mrs. Doris Cooke and a few others.
At this meeting, Mr. Willie Laast had to gather all his wits to convince them to come down to the then St. Theresa School and build a “Mini Cathedral” that would be more beautiful than the Holy Family Chapel which they had contributed in putting up.
Only gradually did a Catholic congregation become associated with the location at Awudome Circle, when occasionally a priest from Mataheko would come for Sunday Mass, which was held in the evenings in the beginning.
The first structure with open-ended classrooms (old chapel) was used as a church.
Visiting priests also came to Kaneshie through the special arrangement of Mr. Willie Laast.

‘See Something, Say Something’ Campaign Launched |

Liverpool news: Mohamed Salah gives update on his future as Reds ace put up for sale