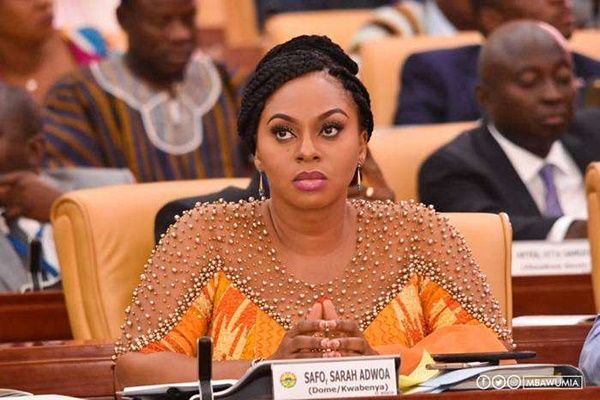 The General Secretary of the ruling New Patriotic Party (NPP), John Boadu, has insisted that the Gender, Children and Social Protection Ministry is in good hands.

The Member of Parliament for Dome-Kwabenya constituency who doubles as the sector Minister has been on leave since the beginning of the year.

President Akufo-Addo has since designated the Minister for Sanitation and Water Resources, Cecilia Abena Dapaah as the caretaker.

This situation has been described as worrying especially as the Ministry is reportedly fraught with a lot of challenges.

Meanwhile, Adwoa Safo in a reaction on social media wrote: “I won’t stay in the USA forever. I have a social contract with the good people of Dome-Kwabenya which I consider sacrosanct. In good time, I will be back to continue the good work we have done in the constituency and ably represent their interest and aspiration in the August House of Parliament.”

Speaking to this on Peace FM’s ‘The ‘ programme, John Boadu described the situation as “dicey” adding the party will take a decision if Parliament resumes from recess and she’s not back.

” . . this situation is a bit dicey . . . I know we have a competent hand taking care of the place in Hon Cecilia Dapaah. . . with this challenge; if you don’t take care, any form of decision can worsen the matter . . . I want to believe that very soon we’ll get out of this . . . we don’t want to compound and create more issues out of this. If Parliament resumes and she’s not back then we need to take a decision as to the way forward for the Ministry,” he told Nana Yaw Kesseh.

Parliament went on break on April 5, 2022, to end the First Meeting of the Second Session of the Eighth Parliament of the Fourth Republic.

Minister for Parliamentary Affairs and Majority Leader of parliament, Hon. Osei Kyei-Mensah-Bonsu, has said that parliament is likely to resume from their recess on 24th May, 2022.

Listen to him in the video below