Cause of the fight between two UPSA girls revealed [Screenshot] 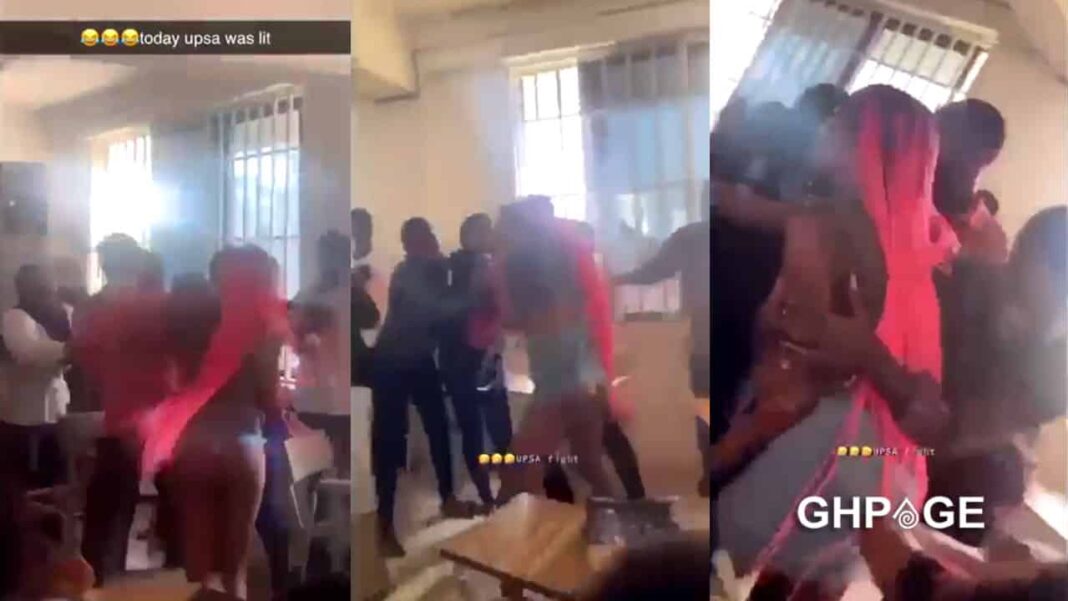 Two female students of UPSA on Thursday gave their colleagues a free showdown as they squared things off right in the centre of a lecture hall.

In the fast trending videos, the duo can be seen aggressively swinging their arms in a bid to land punches at each other as they drag each other’s hair and clothes.

The underwear of one of the ladies spotting a long braided pink hairdo was eventually exposed after her skirt rode up above her rounded bum.

Two men quickly intervened to separate them before the worst could happen, while the rest of their mates cheered on and recorded with their phones.

It is gathered that the scuffle broke out after one of the students named Sika, reportedly made an offensive remark toward her friends.

A student who witnessed the incident, Kwame Addi took to Twitter to react to the viral video writing: “Hm sika …..just because she said her friends are useless hm.”

Conflicting reports suggest the ladies are not students of UPSA. Another tweep wrote: “The girls fighting in the class ain’t student of UPSA.!!!!!”

Tim: If management see this video, disciplinary actions could be taken against them.

Abodoo: Hook up girls in the class, wow I’m impressed

Sam: Which phone did the guy use, please the guy should go back and take a clear video

Donradikal: This one dismissal go happen p3333…i trust my people