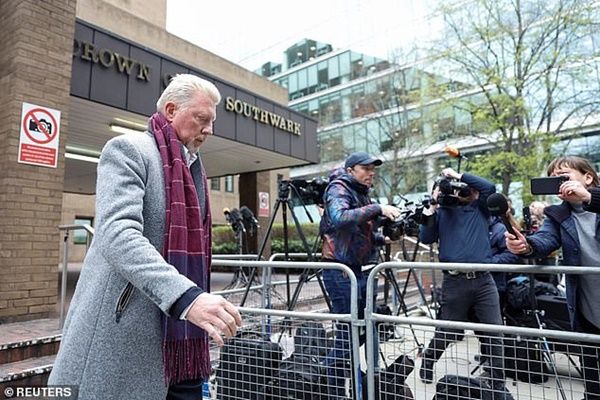 Disgraced tennis star Boris Becker is struggling to adjust to life behind bars as he comes to grips with the ‘constant noise’ and small portions of basic food.

The 54-year-old champion, known for enjoying luxuries like Cuban cigars, fine wines and fillet steak, was brought back down to earth after being served corned beef on his first night in prison.

He was jailed for two and a half years last week for hiding assets during bankruptcy proceedings.

Faulty air conditioner leaking toxic coolant may have killed three Americans in their villas at luxury Bahamas resort Sandals: Sick wife who survived ordeal is taken to hospital in Florida
Boris faces Brexit meltdown in Northern Ireland after Sinn Fein WINS elections and threatens reunification poll within five years – while DUP is set to boycott Stormont unless the protocol is torn up
GPs urged to spot the early signs of Lyme disease which infects 3,000 Britons each year
Second homeowners face their council tax being doubled if they leave properties unused under levelling-up plans set to be unveiled this week
Boris Becker – with disgraced tennis star shocked by lack of hygiene, overcrowding and darkness of jail’
Palace staff make plans to BLOCK Harry and Meghan’s Netflix cameras from Jubilee events – after insider at streaming giant said bosses were furious Prince gave interview about Queen to rival NBC despite their multi-million-dollar deal
Duke of Cambridge’s best friend William van Cutsem was ‘frisked in his pyjamas by police’ during a raid on his Norfolk estate to probe illegal gamekeeping
Prince William and Kate ‘want to be known by first names and NOT their titles’: Duke and Duchess plan shake-up royal protocol to modernise the monarchy public relations blunders during tour of Caribbean
Can you EAT your way to a less painful period? Experts reveal how to beat cramps by upping your fibre intake and banishing sugar cravings with avocado for breakfast
Would you carry a GLASS handbag on a night out? Fashionistas – including Kylie Jenner and Doja Cat – go wild for delicate £2,200 accessory by Parisian brand Coperni
Leaked memo demolishes Labour leader’s Beergate story showing curry WAS pre-planned and Angela Rayner was ALWAYS on guestlist – before whistleblower from bash reveals he will tell police NO work was done after and guests were ‘p***ed’
PETER HITCHENS: Part of the UK will soon be ruled by Dublin. So much for the defeat of the IRA…
Our cherished unity has never seen such threat, says ex-Northern Ireland Secretary JULIAN SMITH
Boris Johnson is warned the UK faces its greatest threat for centuries as Sinn Fein’s Vice President – once described as ‘the representative of Gerry Adams on Earth’ – wins power at Stormont
PM bets on the Red Wall to save his skin: Furious Tories demand tax cuts after disastrous local polls as ministers say Boris ‘can and will’ fight the next election – and scrambles to ‘reset’ his premiership with Levelling Up drive in Queen’s Speech
Neighbours reveals the FULL list of cast returning to Ramsay Street alongside Kylie and Jason for the soap’s finale
DR ELLIE CANNON: My cancer is terminal… so when can I tell my doctors I am ready to go?
Thousands of students could miss out on graduating this year as lecturers at 44 universities threaten to boycott the marking of exam papers
Does your school make the list? Revealed: The 63 state secondary schools rated ‘inadequate’ by Ofsted
Supporters of Britain’s biggest far-right group Patriotic Alternative are filmed calling England star Raheem Sterling a ‘chimp’ and ‘n*****’ – as top government adviser calls for organisation to be banned
Her Royal Heinzness! Camilla reveals she prefers beans on toast to posh nosh and says she has ‘never followed a recipe’ in her life – in You magazine interview with her food critic son Tom Parker Bowles
Fab Four get set for a reunion at St Paul’s next month – but could it be even frostier than their previous appearance at Westminster Abbey?
Huw Edwards was warned the BBC ‘wouldn’t want a nutter reading the news’ after he confided to colleagues about his battle with depression
Out of the dusty vaults… the Queen’s magical home movies: Monarch is seen beaming alongside her sister and father as charming footage of her carefree days as a young Princess is released for a BBC documentary
Previous
Next

Boris Becker ‘complains about prison food after being served corned beef for first meal – with disgraced tennis star shocked by lack of hygiene, overcrowding and darkness of jail’
Becker was known for enjoying luxuries like cigars, fine wines and fillet steak
But he was brought back to earth after being served corned beef on first night
Star has also struggled to sleep, complaining of the noise and smells in prison
By TOM PYMAN FOR MAILONLINE