Traders Should Be Blamed For Economic Hardships Because They Hardly Have The Nation At Heart – Imam. 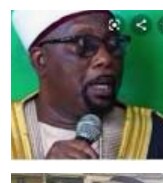 The Ashanti Regional Chief Imam, Sheikh Abdul Mumin has alleged that traders in the country needs to be blamed over the current challenges that are confronting the country.

Speaking to the correspondent as part of his messages to climax the Ramadan festivities, the Chief Imam asserted that some traders have allegedly adopted some systematic schemes to derail the development of the country.

He said such traders take advantage to increase their goods, even to hundred percent at any time when government increase the prices of fuel.

At market places all over the country one can witness about how some traders have increased their goods even to over hundred percent though the prices of fuel were not raised up to that percentage, the Imam hinted.

Describing the conduct as unfair the Chief Imam reiterated that the actions of many traders clearly shows that they don’t have the welfare of the country at heart.

We should blame ourselves for the country’s crisis and not the government, Imam pointed out.

Another worry of Sheikh Mumin is that the same people who makes the country ungovernable in terms of trading activities are those who turned round to blame the government about the challenges that are confronting the country.

Allegedly target to create problems in the society, the Imam stated that such people are though Christians and Moslems, they fail to pay their tithes and state taxes for development.

Yet they always sounded vocal in their quest to criticise government, stressing, l disagree with such elements when l meet them in the act of blaming government over the downward trend of the country, lmam disclosed.

To reverse the trend the Chief Imam urged Ghanaians particularly the traders to change their mindsets, stop struggling for quick monies and instead think about the country first for the sake of national development.