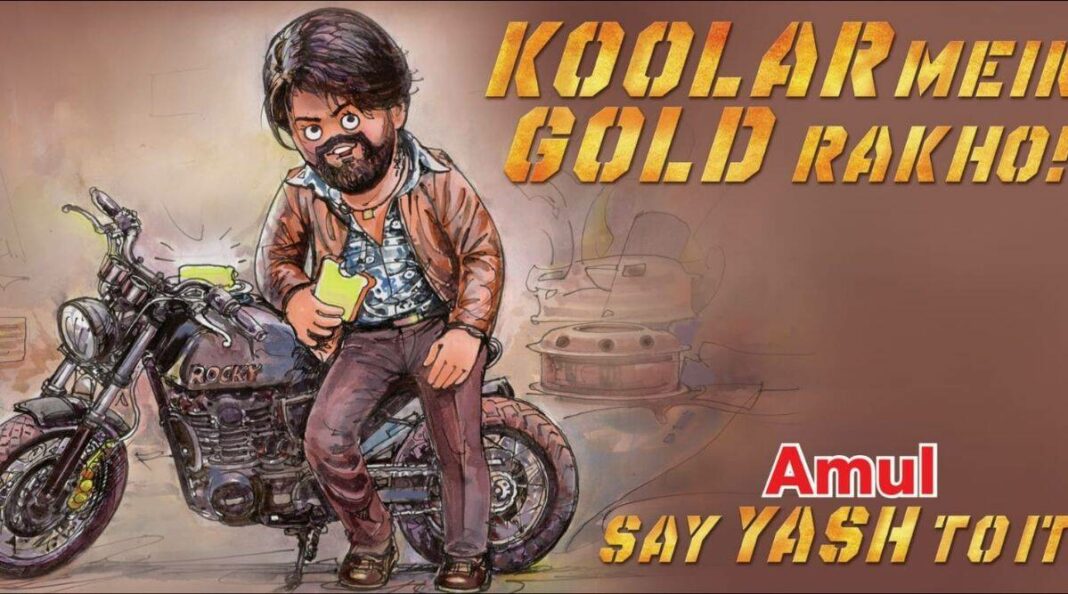 Dairy brand Amul, which is known for its sharp take on current issues and clever use of words, came out with a topical that celebrated the success of the period action film K.G.F Chapter 2. With a box office collection of over Rs 500 crore, K.G.F Chapter 2 has become one of India’s highest-grossing films.

In its usual witty take, Amul’s topical Tuesday shows actor Yash, who plays the protagonist Rocky, dressed in his character’s signature brown leather jacket. He is shown leaning against his high-speed Hero Karizma R while holding a toasted bread with Amul butter spread over it in one hand.

The text on the topical says Koolar Mein Gold Rakho and “Amul, say Yash to it”. The witty reference is to the Kolar gold mines where a major part of the movie is set as well as to the lead actor. With this topical, the brand compared its popular yellow-coloured butter to gold and urged people to keep it in a food cooler—written as Koolar.

In less than three hours since it was posted, the topical has gathered over 4,000 likes on Instagram and almost 3,000 likes on Twitter.

The movie revolves around Rocky, who controls the Kolar Gold Fields and attempts to retain his monopoly over it while fending off rivals and government officials. The super-hit film has an impressive ensemble star cast of Raveena Tandon, Sanjay Dutt, Srinidhi Shetty, and Prakash Raj.

Released on April 14, 2022, the movie was originally made in Kannada and has dubbed versions in Tamil, Malayalam, Hindi, and Telugu. Its first instalment, K.G.F: Chapter 1, came out in December 2018.