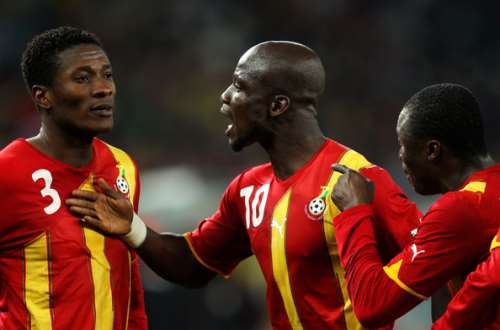 Asamoah Gyan has finally revealed the so-called heated confrontation he had with the then skipper of the Black Stars Stephen Appiah before and after his penalty miss against Uruguay at the 2010 World Cup.

Ghana was on the verge of making history as the first African country to progress to the last four of a World Cup when a goal bound ball was scooped away in the net by Luiz Suarez with his two hands during the quarter final match between Ghana and Uruguay.

The Black Stars were awarded a penalty, but Asamoah Gyan’s attempt from 12 yards agonizingly hit the crossbar. Ghana eventually lost to the South Americans in the shootout when the final score was pegged at 1-1.

Amidst the disappointment which spread across Africa, some people argued that Stephen Appiah had wanted to take the penalty but Gyan refused to let him based on footage and photos extracted from that game.

“At the time he was motivating me and that was after the penalty. I was very worried going into the post-match penalty shootout but he came and told me that he knows what I can do. I was the best penalty taker and it was a mistake. I shouldn’t be thinking that I won’t go and play the penalty. He was behind the reason why I took some of the spot-kicks although I wanted not to play his motivational words helped me to get that vim to take the penalty,” Gyan told Accra-based Peace FM.

“He was telling me not to think that I won’t play but that caption (that picture) came with a lot of opinions. In Ghana, they like spreading negative and everyone has something to say when anything happens. They were saying he warned me not to play and they even said Appiah stated have you seen what you’ve done” after the penalty.

He added, “In that year, they used to appoint a penalty taker before every game and I was the first penalty taker.

“He was going to take the ball for me and he was not going to play. That was what happened.

“I always say when anything happens everyone has something to say and I don’t dispute that so I have to just take it.”