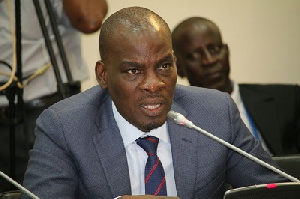 Minority Leader in Parliament, Haruna Iddrisu, has disclosed that the House was yet to debate on the policy principles of the controversial E-Levy.

He said the Minority, as they had already communicated, are against the levy.

Addressing demonstrators who participated in the ‘Yentua’ demonstration when they presented their petition to the House, the lawmaker said the Minority would ensure that parliament is no longer a ‘rubber stamp’ House.

He said on the matter of the E-Levy, the Minority will stand with the Ghanaian populace who are against it.

Haruna Iddrisu said: “On the matter of the E-Levy there is even more to it than many of you can accept this afternoon. I say without fear of contradiction that the percentage is 3.75% and not 1.75%.”

He challenged anyone with technical competence who understands the telecom arena to contradict his assertion.

“We have no hesitation telling you where we stand. We are against E-levy. We will not support E-Levy, we will support other measures of fiscal consolidation,” Haruna Iddrisu stated.