Former Niger-Delta militant leader, Asari Dokubu has urged the federal government of Nigeria to disregard appeals from some Igbo leaders pushing for the release of Nnamdi Kanu, leader of the proscribed Indigenous People of Biafra (IPOB).

Dokubo also disagreed with those calling on the government to release Kanu, arguing that why would they want someone who has been accused of killing Igbo people and bringing chaos to their lands free.

Naija News reports the IPOB leader has been in the custody of the Department of State Services (DSS) from where he appears in court to face charges bordering on treasonable felony and terrorism levelled against him by the federal government.

However, speaking on the matter during a live Facebook session on Thursday night, Dokubo who has been at loggerheads with Kanu said the IPOB leader should remain in custody as he is responsible for the havoc been wrecked by his followers in the southeast over moves to secure an independent state of Biafra. 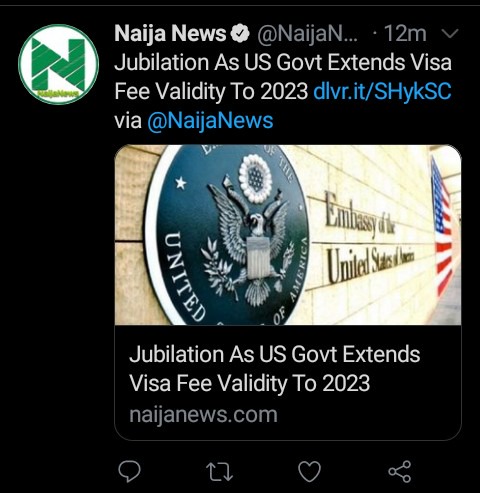 The United States (US) Mission in Nigeria has extended visa fee validity to September 2023 to accommodate applicants facing difficulty in booking appointments for non-immigrant visas.

Naija News learned that the earliest appointment date that many applicants are getting is nine months from the date of booking.

Also, it was learned that the visa fee is only valid for one year from the date of payment.

But in a statement on its website on Thursday, the mission said it has extended validity to September 2023 to enable all applicants to get an appointment date.

The mission asserted that it was working diligently to restore routine consular services that were suspended in the last two years.

Meanwhile, BUA Cement said it will soon complete  the construction of two new plants of 3MMT each in its Sokoto and Edo plants, thus raising its production capacity to17MMT per annum by 2023, from 11 MMT achieved with the commissioning of the new Sokoto Line 4 factory.

Speaking at the commissioning ceremony, President Buhari commended the BUA Group for its investment in the cement industry, which has made the the largest employer of labour in the Northwest zone.

The house of representatives has asked the Central Bank of Nigeria (CBN) to suspend the planned implementation of an electronic invoice (e-invoice) for all import and export operations.

The lawmakers also asked the CBN to give 90 days timeline for subsequent new fiscal/monetary policy implementation to “allow for adjustment to stabilise the economy”.

The lower legislative chamber passed the resolution during the plenary session on Thursday following the adoption of a motion sponsored by Leke Abjide, a lawmaker from Kogi state.

An e-invoice is a digitally-delivered invoice issued, transmitted, received, processed, and stored in a specific standardised format.

Content created and supplied by: Able-gist (via Opera
News )