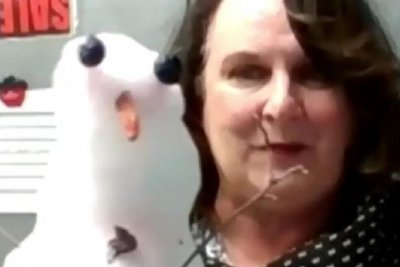 Jan. 27 (UPI) — A Florida teacher who discovered most of her students had never seen snow gave them an unusual surprise by having her sister mail the class a snowman.

Robin Hughes, a special education teacher at SouthShore Academy in Tampa, said she learned that only two of her kindergarten students had ever seen snow, so she contacted her sister, Amber Estes, who lives in Danville, Ky.

“So I said I want you to make me a snowman, and I want you to overnight him to me and see if he can make it to the school — because I want these children in Florida to see snow,” Hughes told WLEX-TV.

Estes said she seized the opportunity after a January snowstorm and built a snowman she dubbed “Lucky,” in the hopes that the frozen sculpture would make it to Florida before melting.

“So we put him inside the packaging, we wrapped him up in that foil, and we put ice packs in, we sealed him up, there was Styrofoam around the box. Off he went down to the local ups store,” Estes said.

SouthShore Academy posted a video to Facebook showing the moment Hughes and her class opened the package and found the snowman inside.

Hughes said she was gratified to see the looks of “pure joy” on her students’ faces.

“Anything I can do as a teacher to bring joy to the classroom and also teach them a little something, then it makes it all worth it. And my sister was just the greatest partner in crime to help me do that, so, he was perfect,” Hughes said.

Hughes said she is saving the water as Lucky melts so he can be part of another lesson — watering a new plant for Earth Day.