Two days ago, the Minority Leader Haruna Iddrisu was in the studios of TV3. He talked about a number of issues with emphasis on the E-Levy. According to Haruna Iddrisu, the Minority will continue to oppose the levy because it will impoverish Ghanaians and again he will move a motion against it and virtually every other bill. He made this at the background that the First Deputy Speaker had said that the government cannot trust Alban Bagbin on the passage of the E-levy.

Today, Thursday, January 27, 2022, Afenyo-Markin, the Deputy Majority Leader also joined Johnnie Hughes on the New Day Show. The duo spoke about a number of issues. Dominant among the issues was regarding the E-Levy. As the conversation travelled, Johnnie noted that Afenyo Markin was preaching for peace and consensus and meanwhile other government communicators like Hon. Stephen Amoah were saying the levy will be passed at all costs. 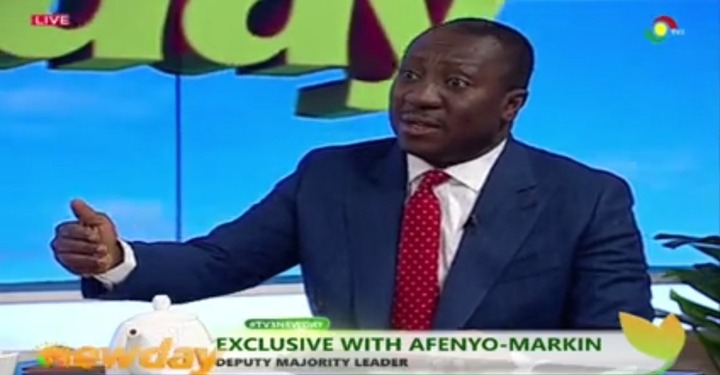 Afenyo Markin felt uncomfortable with that video of Stephen Amoah and asked for it not to be played. According to him, the MP expressed his view. The Deputy Majority Leader then started praising Johnnie and said some matters are better left not talked about.

“You are Johnnie, John the Baptist. You look handsome. I like the way you do your programme. Sometimes it bites but it is all good. Some of our people may not like you but you are doing well. Let’s overlook what the MP said. He might have said it within a context” Afenyo Markin said. Johnnie then raised issues about what Joe Osei Owusu had said about not trusting the Speaker.

Again Afenyo Markin tried to flatter Johnnie and said Johnnie was taking things out of context because the First Deputy Speaker was only telling the Majority to be in their numbers when the bill is presented. Apparently, the praises made Johnnie tell Afenyo Markins to stop patronizing him so they deal with the issues at hand. This got both of them laughing.

The government will be holding a Town Hall meeting today in Koforidua at 2pm to address some of the concerns against levy. Other hall meetings will follow in other regions.