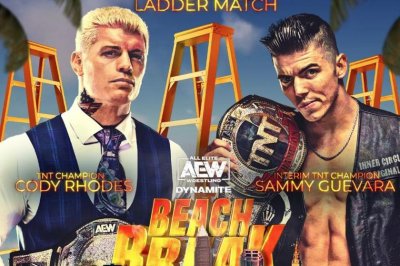 Jan. 27 (UPI) — Cody Rhodes and Sammy Guevara battled each other in a death-defying Ladder match to determine the undisputed TNT Champion on a special edition of AEW Dynamite titled Beach Break.

The Ladder match kicked off the show on Wednesday as both the TNT Championship and the Interim TNT Championship were held above the ring. The match is won after a competitor can climb the ladder and grab both titles.

Guevara was crowned the Interim TNT Champion after Rhodes was out of action for two weeks.

Rhodes and Guevara battled through the packed live audience at the Wolstein Center in Cleveland. Both men then later climbed the ladder, which ended with Rhodes delivering a Delayed Vertical Suplex from the top.

The American Nightmare later applied the Figure Four to Guevara after he pulled his opponents leg through the ladder. Guevara, after both men climbed seperate ladders, leaped off of his ladder to grab Cody and perform an impressive Cutter. Rhodes would respond with a Cross Rhodes off of the ladder.

Fuego Del Sol, who is friends with both Rhodes and Guevara, pleaded with Rhodes to stop the match. Rhodes responded by taking Sol out with a Tiger Driver, which was followed by Guevara taking Rhodes out with a GTH.

Guevara was able to win the match after he rammed a hanging championship belt into Rhodes’ head. Guevara was then free to grab both titles and be crowned the undisputed TNT Champion.

CM Punk came out to the ring dressed in his wrestling gear and once again called out his rival MJF to face him in a one-on-one match.

MJF came out wearing his signature suit and said no, stating that Cleveland was unworthy of seeing such a bout. MJF, however, did challenge Punk to a match next week in Punk’s hometown of Chicago.

MJF poked fun at Punk taking an extended break from professional wrestling and later approached the ring with his Pinnacle teammates FTR and Wardlow behind him. Shawn Spears, also a member of Pinnacle, ambushed Punk from behind.

The Pinnacle beat down Punk with Spears using a chair. The assault ended with Wardlow Powerbombing Punk onto a chair.

Adam Cole and Orange Cassidy had an Unsanctioned, Lights Out match in the main event. The bout had no rules and would not be officially counted. Cole and Cassidy wasted no time and started to trade punches in the middle of the ring.

Cole later went to grab a chair from underneath the ring, only to discover that independent wrestling star Danhausen was holding it. AEW later announced on social media that the very nice, very evil Danhausen has signed with the company.

Cole requested help from his friends Brandon Cutler, Bobby Fish and The Young Bucks, but they were all thwarted by Cassidy’s group Best Friends, which includes Wheeler Yuta, Chuck Taylor, Trent and Rocky Romero.

Cassidy was able to land his finisher move the Beach Break, but it wasn’t enough. Cole tried to hit Cassidy below the belt, but he hurt his hand in the process as Cassidy was wearing a steel cup.

The match spilled out into the backstage area and later on the entrance ramp. Cole climbed to the top of the entrance tunnel in order to perform a Panama Sunrise, but Cassidy was no longer below him.

Cassidy had also climbed up the entrance tunnel and hit Cole below the belt before he hugged him. Cassidy then sent himself and Cole crashing through the stage below and pinned Cole to win the match.

Other moments from Beach Break included Wardlow defeating Elijah Dean and James Alexander in a Handicap match; Chris Jericho, Santana and Ortiz of The Inner Circle defeating 2.0 and Daniel Garcia despite Jericho being frustrated with his teammates; Leyla Hirsch defeating Red Velvet; and AEW Women’s World Champion Dr. Britt Baker bragging about all of her accomplishments from 2021.