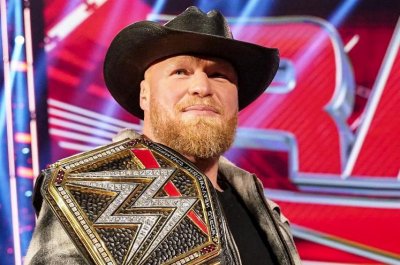 Jan. 25 (UPI) — WWE Champion Brock Lesnar and his upcoming opponent Bobby Lashley had a weigh in for their match at the Royal Rumble on Raw.

Lashley arrived onto the scene first with his manager MVP and was wearing appropriate attire for a weigh in on Monday.

Lesnar came second with his advocate Paul Heyman, but was taking the weigh in less seriously as he was wearing jeans, a flannel shirt and a cowboy hat.

Lashley stepped onto the scale and weighed 273 pounds, followed by Lesnar who came in at 286 pounds.

Lashley said Lesnar was acting like a fool and promised to give Lesnar the shortest championship reign of Lesnar’s career. The Beast then got on the microphone and joked about Lashley winning, referring to him once again as Bobby Who before he exited the ring.

Lesnar and Lashley clash for the WWE Championship Saturday at the Royal Rumble.

Also on Raw, The Miz threw a birthday celebration for his wife Maryse and filled the ring with family photos and gifts.

The Miz gifted Maryse a painting of themselves dressed as royalty, a new purse and the brick Maryse used to attack Beth Phoenix last week.

Phoenix and her husband Edge then interrupted the party and beat up The Miz’s security team. The Hall of Fame couple destroyed The Miz and Maryse’s gifts including the painting.

Edge ended things by sending a security guard crashing through Maryse’s birthday cake with a Powerbomb. Edge and Beth Phoenix will face off against The Miz and Maryse at the Royal Rumble.

Randy Orton and Riddle of RK-Bro were challenged by Raw Tag Team Champions Chad Gable and Otis of Alpha Academy to a spelling bee. The contest was the first of the Alpha Academy’s Academic Challenge that will take place over the coming weeks on Raw.

Gable, despite flaunting how he had just graduated with a master’s degree with a 4.0 GPA, accidentally spelled out dissolution when he was supposed to spell out disillusion. Orton then won the spelling bee for his team after he correctly spelled out dumbbell.

Gable then battled Orton in a one-on-one match where Gable was able to hold his own against The Viper. Gable was able to apply the Ankle Lock on Orton when suddenly Riddle attacked Otis outside the ring with his scooter.

Orton escaped the Ankle Lock and nailed Gable with an RKO in order to win the match. Riddle, due to RK-Bro winning the spelling bee, then got to choose next week’s academic challenge. Riddle said he was taking things back to gym class and challenged the Alpha Academy to a scooter race.