Whistleblowers to be protected by Special Prosecutor

Corrupt officials to be arrested and prosecuted, OSP

The Office of the Special Prosecutor (OSP) has announced the commencement of investigations into the banking and financial sector crisis which led to the collapse of some banks since August 2017.

Nine universal banks, 347 micro-finance companies, and other financial institutions were affected by the clean-up and recapitalization reforms.

The Special Prosecutor, Kissi Agyebeng in a statement however says his office has begun full investigations into the crisis.

Kissi Agyebeng says any official found culpable and complicit would be arrested and prosecuted.

He is however calling on “members of the public who have knowledge of the commission of corruption or corruption-related offences to lodge complaints with the OSP against any official in this regard.”

The SP assures “that all necessary and reasonable steps shall be taken to protect the safety and welfare of all informers, whistleblowers and witnesses.” 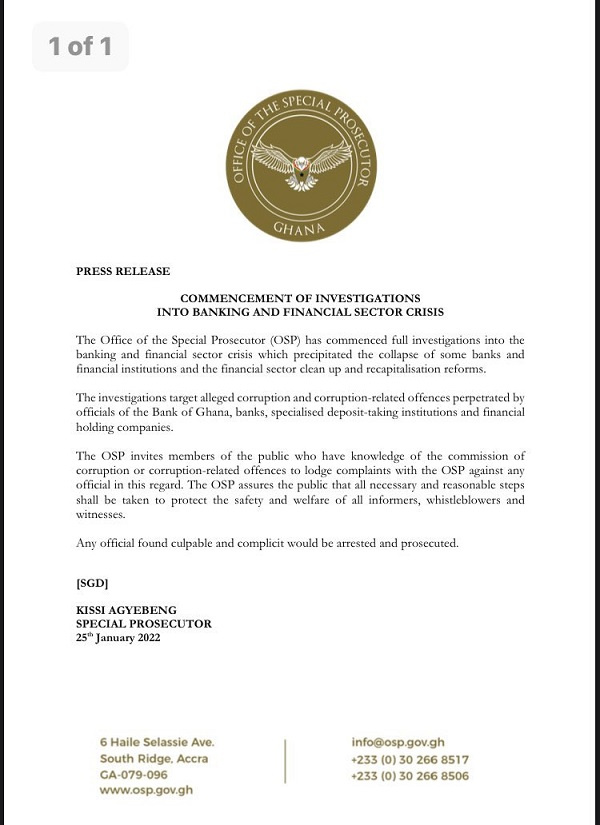 The Securities and Exchange Commission also revoked the licenses of 53 Fund Management Companies, many of which had been flouting various corporate governance tenets.

Meanwhile, Finance Minister Ken Ofori-Atta, revealed in March 2020 that the banking sector cleanup had saved about 4.5 million customers of affected institutions from losing their deposits.

He said a total of GHGH¢21 billion was spent on the exercise.

Liberate yourselves from poverty through entrepreneurship, Youth urged