Sheikh Tophic Sienu, the editor of FootballMadeinGhana has rebuked ace sports journalist Dan Kwaku Yeboah over his criticism of GFA president, Kurt Okraku, on his role in Ghana’s poor showing at the 2021 Africa Cup of Nations.

Sheikh as he is known in the media fraternity shared a Facebook post in which he laid into Dan Kwaku Yeboah for being critical of Kurt Okraku’s FA.

Tophic accused Dan Kwaku Yeboah of furthering an ‘agenda’ against the Ghana Football Association and its president.

He alleged that Dan Kwaku Yeboah made similar moves against a former president of the Ghana Football Association, Kwesi Nyantakyi.

“You did it against Kwesi Nyantakyi and during the Normalization Committee era, every rational Ghanaian knew the stuff you are made of. You lost it all because u clearly showed you hated KN because you wanted him out so you could also take over. Alas, we saw it.

“I recall when u once told me u fell out with me because I supported someone (KN) u were campaigning against. An honest and objective person wouldn’t do this if indeed u are fighting the course of the country and not your personal interest.

“U have started again, against Kurt simply because Black Stars failed. You can do all your propaganda against the man, but charlie, try to be honest,” he said.

Sheikh Tophic said that Dan Kwaku Yeboah lacks the morale right to criticize Kurt Okraku after his role in the Normalization Committee.

“If everybody will aim a dig at Kurt, you should be the last person to do that. Your role during the NC era is a testimony. Shut up Dan Kwaku Yeboah. Shut up!”

Dan Kwaku Yeboah has been very critical of the FA and its president after Ghana’s poor performance at the 2021 AFCON.

His anger was furthered by some statements made by Kurt Okraku in the wake of Ghana’s exit from the ongoing tournament.

Dan Kwaku Yeboah said Kurt Okraku’s treatment of Milovan Rajevac compared to how he treated CK Akonnor gives him reasons to believe that the FA boss has some hatred against the former Black Stars captain.

“When I heard Kurt’s voice, I was disappointed because for someone who is a trained journalist you should be able to convince people with a nice apology.

The first thing which he got right was taking responsibility, the next was to apologize. You’ve raised the expectations of people as a leader. We all wanted Ghana to win but as a leader, he thought his approach was right but it turned out bad,” Dan Kwaku Yeboah stated.

He added, “The best thing is to say sorry because there were other alternatives that people suggested but because you are the leader, your approach should be respected and people did so.” 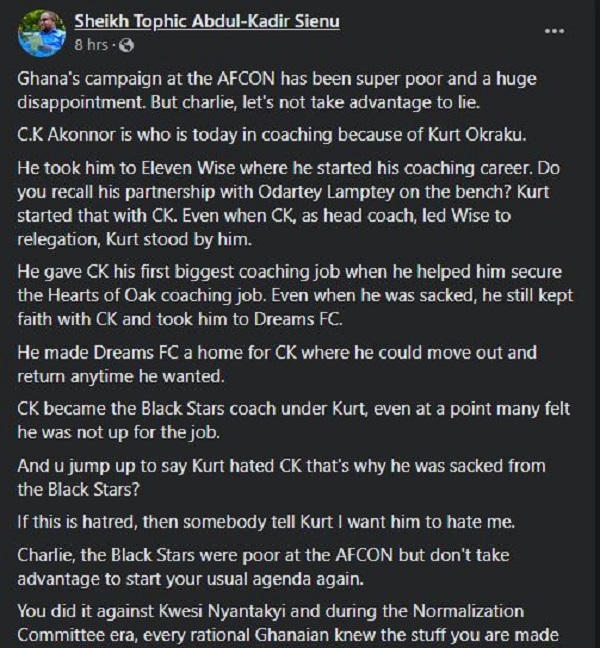