Media personality, Bolanle Olukanle has taken to her social media to share her two cents after he confessed he has been having extramarital affair.

This is coming after the singer had on Tuesday January 25, tendered a public apology to his wife, Ozioma for cheating on her with a US-based woman.

Bolanle has said that when a minister of the church falls, he should not only confess but must step away from the Ministry.

The media personality stated this after popular gospel artiste, Sammie Okposo stepped away from music ministry while admitting to an adulterous affair.

READ ALSO: sammSammie Okposo Confesses To Cheating On His Wife During His Trip To US

Reacting to the news on social media, Bolanle wrote; “Yes he did a horrible thing and now he has made steps to restore and heal. You can’t be cheating and still ministering. Even if you have repented. Leave the ministry and go and ask youself why you were cheating. Find the foundation of your relationship with God before you lead others,”

“When you cheat and you are in a moral position you must step away from Minstry! You have to. And also it’s soo important to hold yourself accountable and confess. When something is in the dark let it comes to the light so that there is healing!” 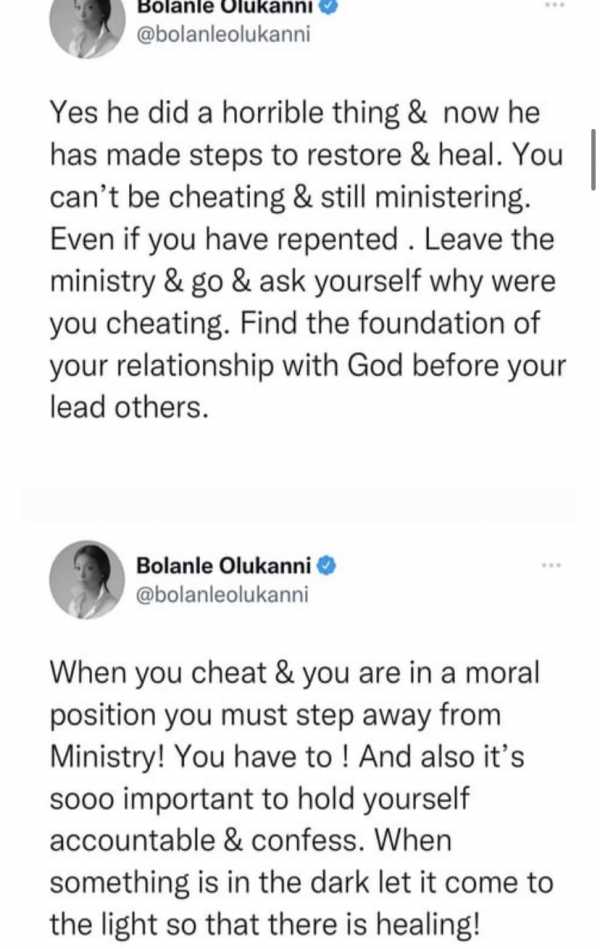