NPP Polls: One person Arrested With Weapon At Savannah Region

There is something fundamentally wrong with Ghana—Rev Prof Martey

Chelsea move spending plan could be supported by further £61m. 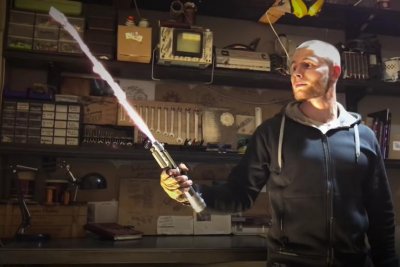 Jan. 24 (UPI) — A Russian YouTuber has been recognized by Guinness World Records as the inventor of the world’s first retractable lightsaber.

Alex Burkan, who runs the Alex Lab channel on YouTube, unveiled his Star Wars-inspired invention, which produces a plasma blade that measures more than 3 feet in length and burns at a temperature of 5,072 degrees — hot enough to cut through steel.

“The key component of my lightsaber is an electrolyzer. An electrolyzer is a device that can generate a huge amount of hydrogen and oxygen and compress the gas to any pressure without a mechanical compressor,” Burkan told Guinness World Records.

He said it took hundreds of experiments to get his apparatus to match the size and shape of a lightsaber hilt.

“This is a first prototype so it has lots of limitations. It works for only 30 seconds on full power, the hydrogen torch is not as stable as it could be and you can easily see it when it moves. Sometimes the lightsaber just blows up in your hand because of hydrogen flashback,” he said.

“The Hacksmith version is much more powerful, it definitely works longer than 30 seconds. Our duel would be extremely fast and furious, because I have only 30 seconds to win,” Burkan said.

Burkan said he and Hobson have a friendly rivalry.

“Sometimes we discuss our current projects. Sometimes we threaten each other with our new inventions, but we always support each other,” he said.

NPP Polls: One person Arrested With Weapon At Savannah Region

There is something fundamentally wrong with Ghana—Rev Prof Martey

Chelsea move spending plan could be supported by further £61m.

Nadal stays on course for possible Djokovic clash in quarter-finals