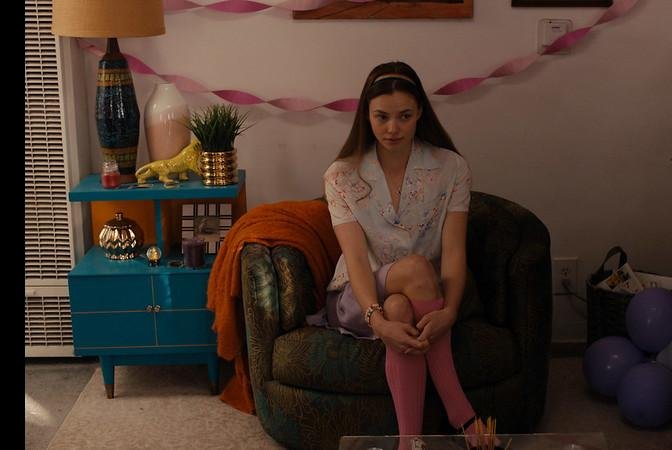 Sarah Jo eats yogurt sloppily, and rubs a scar on her stomach while she watches her computer screen. It is sweet how Marilyn tells the girls the story of how she adopted Treina after a divorce, and gave birth to Sarah Jo in a surprise pregnancy. It’s clearly a story she’s told before and the girls like it.

One day when Heather is away at work, Sarah Jo comes onto Josh. Sarah Jo is 26 and still a virgin, she explains. The scar is the result of a radical hysterectomy she had to have when she was 15. Sarah Jo says she’s already been through menopause and wants to feel what it’s like to lose her virginity. So, after seemingly obligatory protests, Josh obliges and they begin a regular affair.

Dunham has personal experience having had a hysterectomy at age 31. Who is to say the right way to creatively explore the feelings that would entail? Dunham did choose to make Sarah Jo younger than she was, and chose that Sarah Jo had her procedure as a teenager.

Adultery is a troubling theme too, and one many films have explored. Josh and Heather’s marriage is strained, despite the enthusiasm Josh projects. However neglected Josh may feel by his wife, who is pregnant through IVF treatments, he succumbs to Sarah Jo’s temptation.

Even at 26, Sarah Jo exhibits as developmentally much younger. She’s naive and seems so young, her interactions with Josh remain uncomfortable. The film itself seems to decide this relationship is empowering to her, which is a filmmaker’s right to do. Movies don’t necessarily have to be moral, and perhaps Dunham’s intention is to question why such a relationship makes one uncomfortable.

A woman in Sarah Jo’s situation may have few options to turn to for a sexual awakening. Josh is the only adult man in her circle. The film does suggest a pattern of Josh’s behavior, but fails to make a convincing case that Sarah Jo was empowered.

Sex scenes are tasteful inasmuch as they don’t expose too much. But seeing these characters in the throes of passion, for Sarah Jo’s sexual awakening, is uncomfortable enough. The whimsical tone undermines Sarah Jo’s empowerment more than anything, as it renders her childish through the very end.

After their affair, Sharp Stick goes on another sexual tangent with Sarah Jo discovering other sexual outlets. Her second outlet is arguably healthier than sleeping with a married older man, but also seems to begin a different movie ⅔ of the way through this one.

If one has no moral judgment on the subject matter, Sharp Stick is well written, acted and competent. Moral judgment has been part and parcel of Dunham’s work, so this is no different, and it’s not a film made for widespread acceptance anyway. However, Sharp Stick mostly seems content to depict a provocative relationship without interrogating it in depth.