Prepare To Answer Questions As To How You Built These Houses In Four Years; Massive Reactions-Taylor 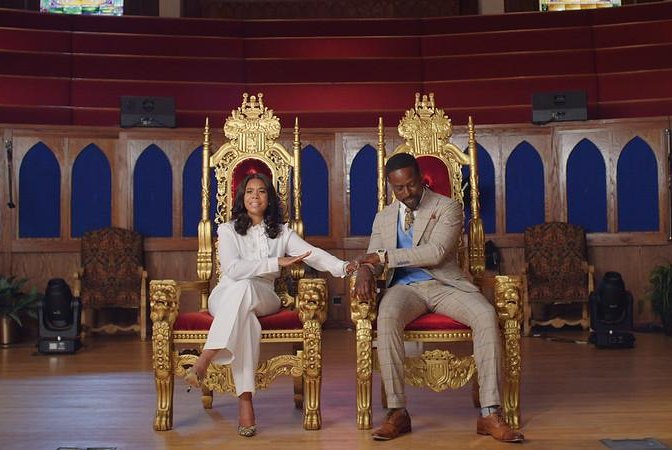 Regina Hall and Sterling K. Brown play disgraced church leaders in “Honk For Jesus, Save Your Soul.” Photo courtesy of the Sundance Institute

LOS ANGEELS, Jan. 24 (UPI) — Honk for Jesus, Save Your Soul, which premiered virtually at the Sundance Film Festival on Sunday, delivers a relevant social message in the guise of a mockumentary about a megachurch. It has a social scope larger than issues in the church, and gets to the heart of those issues through this microcosm.

Lee-Curtis Childs (Sterling K. Brown) and his wife Trinitie Childs (Regina Hall) are reopening Wander to Greater Paths Baptist Church. A scandal has forced them to close, so a documentary crew follows the pastor and First Lady in their attempt to win back their congregation’s trust.

Right away the documentary crew catches the real Childses beneath their spiritual veneer. Lee-Curtis wants them to edit out profanity to present the chaste image he wants to project.

Throughout the film, the viewer learns piecemeal about the sexual misconduct allegations for which Lee-Curtis made a settlement with several boys. The fact that Lee-Curtis gives homophobic sermons, and seems to be repressing feelings in a bedroom scene with Trinitie, suggests more.

Though the film never explicitly defines the scandal beyond individuals’ reaction to it, church abuses are unfortunately common enough for most audience members to fill in the gaps. Heck, the movie about exposing the Catholic Church scandal, Spotlight, won the Oscar for Best Picture.

It would also apply to any form of disgrace and attempted redemption. You could call it “cancel culture,” although these issues existed long before that became the buzzword for them.

Lee-Curtis and Trinitie think if they project enough righteousness, they can show the world they’re redeemed. There’s a humorous aspect of that because the characters are extreme personalities, and the performers are so charismatic. The harder they try to act righteous, the funnier their veneer can be. Look, they’re sitting on thrones!

The veneer slips pretty fast, and writer/director Adamma Ebo pulls back from the mockumentary to show the characters behind the scenes, too. Trinitie calls Lee-Curtis out that his big apology does not actually acknowledge any wrongdoing.

This confuses Lee-Curtis, as his redemption is all performative. He’s not actually doing the work.

At one point Lee-Curtis suggests “If anything, I was too warm, too generous.” “I was too nice” is a common refrain, one that recently Joss Whedon suggested to Vulture in a profile. Ebo would have written, filmed and submitted the movie to Sundance long before that piece was published.

Trinitie may be more self-reflexive than Lee-Curtis but both keep talking instead of listening. Ultimately, there’s no perfect speech that’s going to win them forgiveness.

Honk for Jesus does a good job demonstrating the futility of avoiding dealing with wrongdoings head on. Hall has one powerful speech at the end that she just knocks out.

The title comes from a sign Trinitie holds at the side of the road to inform passersby of their church reopening. The film could be funnier to make the poignant message more of a gut punch, but such crass and desperate displays keep it entertaining, but once the audience is in the door, the message is clear.

Manchester United star’s agent made complaint to club about Ronaldo