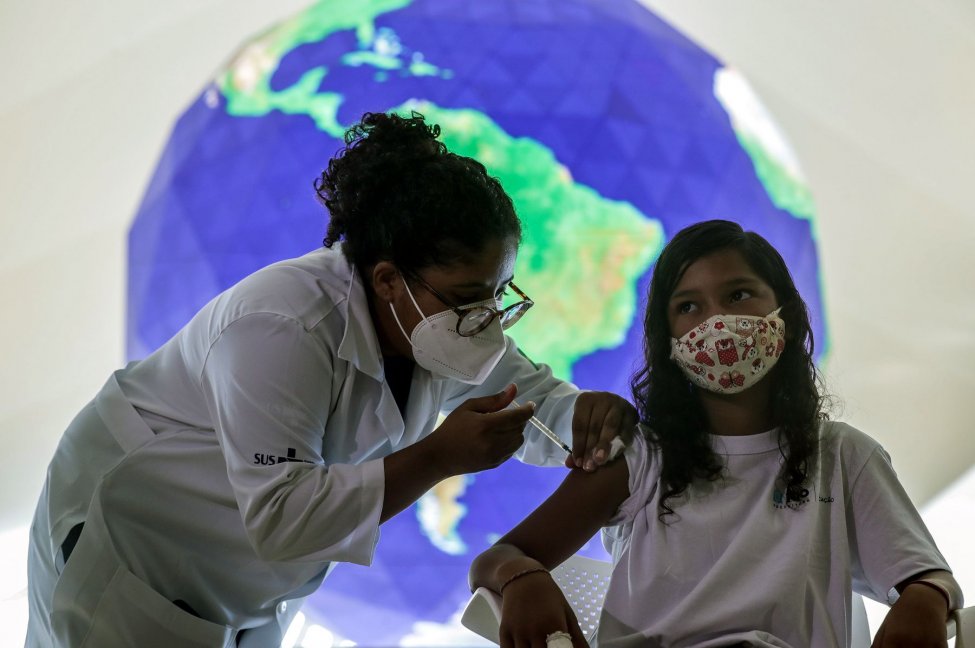 A girl receives a dose of a COVID-19 vaccine at the Museum of Tomorrow, in Rio de Janeiro, Brazil, on Mpnday. Vaccination for children between the ages of 5 and 11 started on Monday in Sao Paulo, Rio de Janeiro and other large cities of the country amid a surge in infections. Photo by Andre Coelho/EPA-EFE

Jan. 23 (UPI) — Two months after the COVID-19 Omicron variant was first reported in South Africa, cases have subsided to an 8% rise in cases, including decreases in some world hotspots, but spikes have been reported in India, Brazil and Japan. Deaths, which lag weeks after infections, climbed 7% in the past week.

Infections are surging in some places that originally weren’t affected by Omicron.

One week ago India’s infections went up 110%.

India’s daily cases increase was below the record 401,078, which was the highest in the world until the omicron spike with the U.S. holding the mark with 897,925 on Jan. 7.

India reported 525 deaths Sunday for a total of 489,409, third behind the United States and Brazil. On Friday, India added 703 deaths, the most since early October.

Japan reported 14 deaths Sunday with the record 227 in mid-May, while Russia’s infections went up 94%.

Studies have shown the outbreak is not as deadly as Delta with vaccine boosters especially effective.

In one by the U.S. Centers for Disease Control and Prevention of 259 hospitals and 383 emergency departments from late August through early January, a third dose of the Pfizer-BioNTech or Moderna vaccine reduced the odds of a hospital or emergency room visit by 82% once omicron started spreading.

“Protection against infection and hospitalization with the Omicron variant is highest for those who are up to date with their vaccination, meaning those who are boosted when they are eligible,” said CDC director Dr. Rochelle Walensky during a White House COVID Task Force briefing Friday. “There are still millions of people who are eligible for booster dose and have not yet received one.”

In all, more than 9.91 billion COVID-19 vaccine doses have been administered, an increase of 220 million in one week with the world’s population of 7.9 billion, according to Bloomberg tracking.

Broken down by world regions, the United States and Canada have administered at least one dose to 76% of the population, followed by Latin America at 72%, Asia-Pacific 73%, Europe at 67%, Middle East 52% and Africa at 14%, according to The New York Times tracking.

Russia is lagging the world in vaccination with 55.1% of its population with at least one dose of a domestic-produced vaccine, including Sputnik 5.

French Prime Minister Jean Castex announced Thursday most of the restrictions will end next month, including allowing full capacity at large events. Working from home requirements will end and masks won’t be required outdoors.

Also, vaccination will be necessary to events or travel on trains, as negative tests will no longer be accepted.

Last week, the British government announced that Plan B restrictions reimposed in England last month would be lifted. That includes working from home if possible, no mandatory masks in public or a vaccine pass to enter venues.

“We must learn to live with Covid in the same way we have to live with flu,” Health Minister Sajid said last week.

Britain’s deaths are 153,862 in seventh, including 75 Sunday. The kingdom added 438 deaths Tuesday, the most since late February with the record 1,824 in January one year ago.

Before the onset of Omicron, COVID-19 had already been at high levels in Russia, Germany, Ukraine and Poland.

Russia last week went below 700 daily deaths for the first time since July.

Germany’s cases continue to surge, rising 56% in one week.

Germany remains under a nationwide lockdown for the unvaccinated, including nonessential services.

Italy has a “super green pass” requirement for anyone over the age of 12, including on the ski slopes. Required is a certified vaccination or proof of recovery and not merely a negative test.

On Feb. 1, exempt businesses include food shops, supermarkets, pharmacies, opticians, and stores selling fuel and animal food. And “non-essential” shops and services will be extended to public offices, banks, post offices and tobacconists.

In Spain, Cantabria has lifted digital certificates with Catalonia and Andalusia planning to do the same. Catalonia also ends its curfew.

On Friday, Austria’s parliament approved mandatory vaccines with violators fined. The rule is scheduled to begin Feb. 1 if it is signed by President Alexander Van der Bellen as expected.

India holds the world daily record for deaths, not including major reconciliations: 6,148 deaths in June. The Delta variant emerged in India.

India, which is the prime manufacturer of vaccines for the world, has a one-shot rate for the entire population of 67.1%.

Several states and union territories are continuing night curfew rules or Sunday lockdown, including in Delhi between 10 p.m. and 5 a.m.

In the central Chinese city of Xi’an, with a population of 13 million, the first commercial airline flights took off Saturday from there for the first time in a month. The city has been in lockdown since Dec. 22.

The Winter Olympics’ scheduled start is Feb. 4 in Beijing, which reported its first Omicron case one week ago.

Most Chinese people won’t be able to attend the Olympics with foreigners also banned. The Beijing 2022 organizing committee announced Monday that it was ending public ticket sales “to ensure the safety of all participants and spectators.”

Japan, which hosted the Summer Olympics during the Delta surge, reported 14 deaths Sunday for a total of 18,523, rising 78 in a week.

“This has been a fight against an unknown virus, but we hope to overcome this situation by preparing sufficiently without fearing excessively,” Prime Minister Fumio Kishida said at a meeting of the government’s COVID-19 task force.

Japan has a relatively low 16,852 infection per million.

Israel has lifted travel bans to destinations in Israel’s list of “red” countries with high infection rates, including the United States, Britain and Canada. Instead, protocols are in place.

The CDC is advising against travel to Israel, rising it to “level four: very high.” Other countries on the level four list include Canada, France, Qatar, Saudi Arabia, South Africa, Turkey and Britain.

Starting Saturday, foreign travelers to the United States are required to be fully vaccinated in updated rules from the Department of Homeland Security.

The United States’ deaths decreased 2% and cases dropped 17%. On Saturday, the United States reported 841 deaths and 312,314 cases though more than half the states don’t report data on weekends.

Canada has around one-third the rates per million than the United States with deaths 850 and cases 75,948.

Canada has the best one-shot vaccination rate of the three largest countries in North America at 84.1%. The United States is at 74.7% for one shot. Mexico’s percentage is 65.1%, though it was the first Latin American nation to begin vaccinating people.

Ontario has more than 4,000 COVID-19 patients in hospitals, which is much higher than previous waves.

Starting Jan. 31, Ontario will allow restaurants, bars, gyms and movie theatres to reopen with 50% capacity. Larger venues will also be allowed to operate at half capacity or 500 people, whichever is less. Cinemas, sports facilities and other similar places still won’t be allowed to serve food or drinks.

“There is no doubt that nobody wants to have all these restrictive measures anymore, and Omicron may or may not have put us one step toward that new reality,” Dr. Theresa Tam said Friday during a COVID-19 briefing in Ottawa.

“So I think we need to plan for the different scenarios and just be ready for a time of emergence of new variants. But we’ve got to move on and see how we can make our societal functions closer to what they were before the pandemic.”

Three Mexican states, Baja California Sur, Chihuahua and Tamaulipas, are operating under orange status restrictions, according to the federal government’s traffic light pandemic monitoring system. This includes limiting the number of workers on-site. Another 10 states are in yellow status and 10 are green, including Mexico City.

Peru has the world’s highest death rate at 6,060 per million people.

Rio de Janeiro and Sao Paulo Carnival festivities have been postponed to April 21 from Feb. 25 to March 2 in a joint announcement Friday.

Earlier this month, the street parades were called off.

Until a few weeks ago, Australia had largely avoided mass infections, with only 2,688 as of Oct. 14. The nation reported 48,932 Sunday, about one-third of the record recently.

Australia’s provinces had been in a months-long lockdown in an effort to keep cases low. But now Prime Minister Scott Morrison declared it was now possible to “live with this virus.”

Students are scheduled to return to classrooms later this month after the break.

“We do expect that transmission potential, as we call it, will increase as schools go back. But that is something we need to deal with,” chief medical officer Dr. Paul Kelly, said in a report by The Guardian. “All my colleagues in the states and territories agree that the most important thing is to get schools back.”

Australia has vaccinated 82.3% of its population with at least one dose.

New Zealand’s deaths remained at 52 total and the nation added 71 cases Sunday with its record of 222 on Nov. 16.

New Zealand, which has a 78.5% vaccination rate, is on a traffic light system that had been based on vaccinations but before midnight Sunday everywhere went into Red everywhere. Auckland earlier ended its 107-day lockdown for vaccinated people.

Everyone will be required to wear masks in public venues and on public transportation. Meetings at larger venues will be curbed at 100 people.

Guam, a U.S. territory of fewer than 200,000 people, reported a record 815 cases Tuesday though 8.48% of its eligible population of 5 and older is fully vaccinated.

South Africa’s infections decreased by about one-third five weeks after a 49% gain and deaths are down 13%.

The World Health Organization noted South Africa has been on a downward trend for four weeks.

“So long as the virus continues to circulate, further pandemic waves are inevitable,” Dr. Matshidiso Moeti, WHO’s regional director for Africa, said in a United Nations news release Thursday. “Africa must not only broaden vaccinations, but also gain increased and equitable access to critical COVID-19 therapeutics to save lives and effectively combat this pandemic.”

South Africa’s vaccination rate is only 32.7%.

WHO sees no reason for alarm over monkeypox