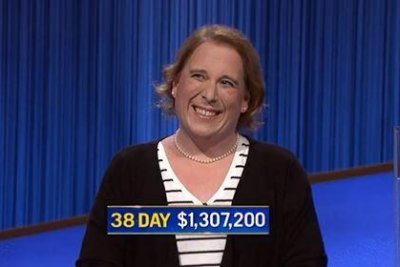 She won against Milwaukee Ph.D. student Avinash Rajendra and an office manager from Georgia, Kore Carey, on Friday, correctly answering two Daily Doubles and entering “Final Jeopardy” nearly $29,000 ahead of her second-place competitor.

Schneider tweeted about the third-place tie for consecutive wins: “one thing that may no may not be coming across is just how much fun I was having during all this!”

“The winning is nice, sure, but it was also just a rewarding experience to be so focused on one particular thing,” she added.

Schneider now stands behind only the current host Ken Jennings, who won 74 games straight during a streak in 2004, in the longest consecutive winning streak.

She is also fourth place in total amount of money won in regular season play, trailing Jennings, Holzhauer and Amodio.

Schneider, whose run began on Nov. 17, is also the highest-earning female contestant in the show’s history and the first transgender person to make the Tournament of Champions.