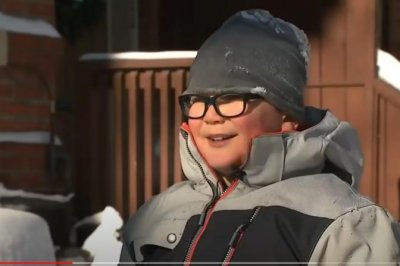 Not many kids would admit to wanting to be in school on a snow day, but after a hard day of snow shoveling, 9-year-old Toronto resident Carter Trozzolo was ready to head back into the classroom.

While doing a piece that aired Monday night on how the city’s residents were digging out from a blizzard that struck the region, a camera crew with a Canadian TV network, CTV, stumbled upon Carter, who was digging out the sidewalk with his shovel. Given a chance to air his grievances to the world, Trozzolo, a resident of Toronto, was more than happy to share how he really felt.

“I am tired,” Carter said before sighing loudly. “I really wish I was in school right now.”

Apparently, his parents had decided to really put him to work, and Carter had been shoveling for “neighbors, friends, probably people I even don’t know,” he explained. “There was a lot of snow, let’s just say that.”

Carter’s exasperation and exhaustion resonated with many in Canada and people across the world, including viewers as far away as Australia.

“I think a lot of us can relate to that amount of exhaustion with everything right now, so I think he captured the emotions of many people,” said Rachel Disaia, Carter’s mother.

The video went viral, and a camera crew returned to the Trozzolo household to see if he was still tired and how he was handling the newfound fame.

“I’m tired,” he said. “I am always tired,” Carter said, adding that he still wants to go back to school.

Carter is not the only snow-shoveler in recent years to go viral for their comments during an interview.

In February 2019, when a reporter from a Chicago area news channel asked Judy Ross, “You’re sick of this?” while she was shoveling snow on her property, he got a rather blunt reaction in response.

“Well, yeah, especially when I’m the only one here doing all this [expletive],” said Ross, of Waukesha, Wis. “My father used to say: ‘I kinda remember that little curly-haired girl that loved the snow.’ And I said, ‘Well, she grew up. She grew up and she doesn’t want to do this anymore.'”

Despite the snow exhausting him, Carter still seems to enjoy it, as he found time to play and lay in the snow after his shoveling duties were done.