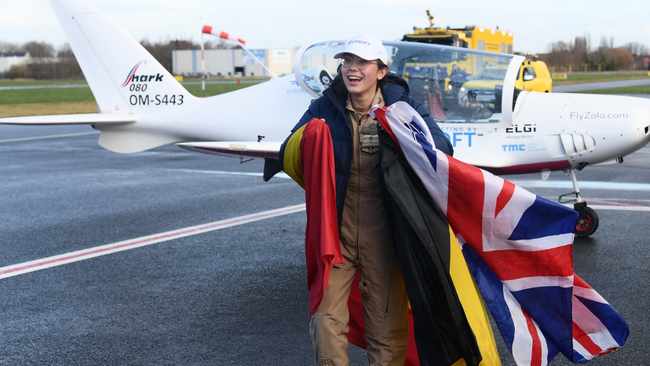 Kortrijk – “It was harder than I imagined,” said teenage pilot Zara Rutherford on Thursday after completing a solo, round-the-world flying odyssey with the aim of getting into the record books.

The 19-year-old touched down at an airfield outside the Belgian town of Kortrijk to a crowd of journalists, well-wishers and family, laying claim to being the youngest woman to have circumnavigated the globe alone in a cockpit.

“It’s very strange being back here,” she told a media conference, adding that, after an epic journey with stops in nearly 30 countries, she was looking forward to putting her feet up for a while in just one place.

“I’d like to do nothing next week” she laughed.

Rutherford, who has Belgian and British nationality, fielded questions in English, French and Dutch. Both her parents are pilots, and her father flew for Britain’s air force.

She explained that Russia’s vast, frozen expanse of Siberia was the “scariest” leg of her journey: a place of overwhelming distance between habitations, and where the temperature fell below minus 30 degrees Celsius (-22 degrees Fahrenheit).

“I’d be going hundreds and hundreds of kilometres without seeing anything human — I mean no electricity cables, no roads, no people — and I thought ‘if the engine stopped now I’d have a really big problem’,” she said.

Navigating the world in a tiny, 325-kilogramme (717-pound) Shark UL single-propellor plane, loaned to her under a sponsorship deal, meant she had to skirt around clouds and could not fly at night.

The restrictions meant many times she had to divert or make hasty landings — including taking to ground quickly early this month, just a short distance from Dubai, to avoid getting caught in the first thunderstorm that city had seen in two years.

There was also a long three-week stretch for most of November in a Russian eastern coastal town called Ayan where she could not take off because of the weather, relying on kind locals who were “very willing to help with anything I might need”.