I was stripped down for a road traffic offense 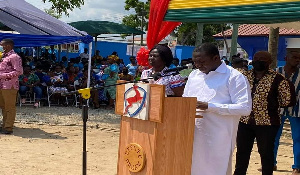 The member of Parliament (MP) for Effutu who doubles as Deputy Leader for the Majority group in Ghana’s Parliament, Alexander Kwamina Afenyo-Markin has hinted at the need to reward inhabitants who have served their communities diligently.

“We must not lose sight of the fact that we are Africans, Ghana to be precise, and that we have our unique way and doctrines of rewarding selfless and dedicated service”.

The vociferous Lawyer and MP disclosed this during the commissioning and handing over of an ultra-modern ICT laboratory, library and fashion training center to the National Vocational Training Institute, NVTI in Winneba on Tuesday, January 18th, 2020.

The state-of-the-art edifice named after late Nii Commey Abbey, erstwhile Municipal Chief Executive for Effutu was financed and equipped solely by Hon Alex Afenyo-Markin in honor of the former MCE for his dedicated and honest leadership offered to the Effutu people during his regime. 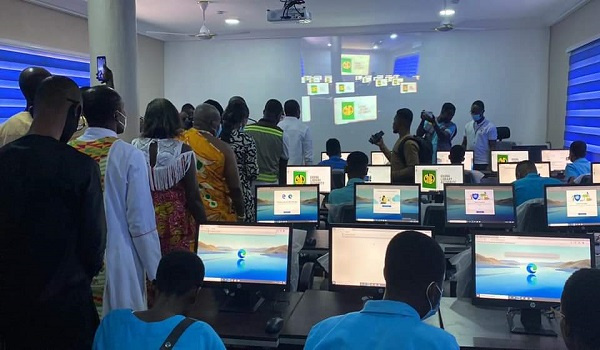 He further bemoaned that, unlike the past where society failed to acknowledge people who served Effutu in the arena of Academia, clergy, Agriculture, political leadership, medical, hospitality, Security etc, I promise to change the status quo and this I have done with all the projects since I became your MP. Hon Markin admonished subsequent MP’s who will come after him to pursue and promote the good initiate he has commenced, this he believes was the surest way to rejuvenate the waning sense of patriotism in some section of the citizenry, he added.

The Effutu MP urged the gathering to support and believe passionately in the Effutu dream “So long as I remain your humble, honest, competent, selfless representative in Parliament; our pursuit to build a modernized, progressive and a robust security for the Effutu constituency we all desire”.

He continued, as future leaders of Effutu “We can, together, build a new civilization “the Effutu dream”, where there is a fair opportunity for all in education, where hard work, enterprise and creativity are rewarded immensely, where there is an abundance of dignified working condition for all, where it is honest amongst all the citizens.

For his part, Ekow Young Martin, who is the Manager of the Winneba NVTI commended the MP for the kind gestures and said they were timely considering the technological advancement in the academic field. In summary, the edifice has three components, namely ICT laboratory stocked with forty computers, a fashion training center equipped with overlock, knitting and embroidery machines numbering twenty and two new pavilions with a set of furniture.

According to the Manager of the school, it was the first time since the school’s establishment in 1992 that such an Infrastructural intervention has been received, adding that the gestures by Hon Afenyo-Markin was highly timely and worth commending, in addition to this, the MP has also sponsored 250 students in the school, provision of laptops to all teachers in the school as well.

He again mentioned that the lack of an official vehicle to monitor the students on their industrial attachment and studies was a hindrance and called on the MP to also help them in that regard. The Manager of the school indicated that the acquisition of the new edifice and its ultra-modern gadgets, automatically places the Winneba National Vocational Technical Training Institute ahead in the Central Region, he noted.

The Chief of the Effutu traditional area, Neenyi Ghartey VII Osabarima in his address urged all participants not to relent on accepting anything but quality especially in the area of education. He advised participants to be part of positive decision-making and be very circumspect and constructive in their criticism of their leaders devoid of insults and propaganda.

He commended the MP for Effutu for his outstanding quality leadership skills, adding that he was God chosen for the people of Effutu, he admonished the students to be serious with their studies and also urged the teaching staff and management to take good care of the facilities.

You’re a ‘Wicked’ Prez If You Appoint Only Those Who Helped You Win Power As Board Members – Pratt Fires Akufo-Addo Over ECG Appointment |...

How Have We Wronged You? – Manasseh Tackles Prez Akufo-Addo | Politics

LOOK: Bonang Matheba slams Minister Nathi Mthethwa, calling him ‘useless and that we all hate you’

LOOK: African media maven Bonang Matheba slams Minister of Arts calling him ‘useless and that we all hate you’

‘I came here as grapes, but I leave as wine’, says Stellenbosch star Zitha Kwinika on Kaizer Chiefs move