Vic Mensa, Ari Lennox and Popcaan were in Ghana for the Christmas holidays

There is a saying that the next day after a vacation ends always sucks, but these celebrities especially, have got it tough.

After jamming in Ghana, these international celebrities who have returned to their various countries have unfortunately been caught up in one controversy or the other.

From news of arrests to trolls on social media and many sad encounters, they have had a hard time dealing with these situations in their respective countries.

Although some have overcome theirs, others are still battling it out.

Perhaps, this is why most of them referred to Ghana as their motherland.

The likes of Chance the Rapper, Ari Lennox, Vic Mensa and many others during their visit to Ghana in December 2021, disclosed that their confidence shot up immediately after they touched down.

To them, the peace and serenity they felt during their stay are totally out of this world.

Vic Mensa’s fun trip to Ghana was climaxed with bad news as the American-based Ghanaian rapper has been arrested by the U.S Customs for allegedly returning with a stash of mushrooms from Ghana.

According to an American news channel, TMZ, the rapper was taken into custody upon his arrival at the Dulles International Airport in Washington DC where mushrooms were found in his luggage after a thorough search was conducted on him for the second time.

Per reports, Vic has since been booked for felony narcotics possession. This is because, in parts of America, Psilocybin (the scientific name for mushrooms or shrooms) remains a substance under federal law although there’s now a push in some states to legalize it.

Shortly after he left Ghana, the Jamaican superstar was arrested in UK based on a tip-off that he is a ‘gangstar’.

One can recall that dancehall artiste was cruising in Ghana during the Christmas holidays and mingling with a host of celebrities and fans.

While he had an eventful time in the motherland, Popcaan again had more drama soon as he touched down in the United Kingdom, where British authorities held him for several hours.

I would like to know why someone with authority in Jamaica send information to England immigration that I’m a gang leader and I got charge with firearm, this is not cool at all from my own country, why I have to be sitting in immigration for over 3 hours??

After having a fun time in Ghana during the Christmas holidays, popular American singer Ari Lennox was bullied on social media after she described Ghana as the most beautiful place and her ancestral home.

The ‘Shea butter baby’ hitmaker who spent her Christmas holidays in Ghana and also graced the annual ‘Afrochella’ concert in December took to Twitter to share positive posts about the country.

Ari Lennox did not only describe Ghana as the most beautiful place in the world but also disclosed that her emotions were triggered when she realized Ghana was the place her ancestors were transported as slaves through the Caribbean to Europe and America.

Her comments attracted severe backlash from some social media users who disagreed with her claims that Ghana is the most beautiful place in the world.

She was subjected to insults and attacks to an extent that Ari Lennox who appeared fed up deleted the comments. 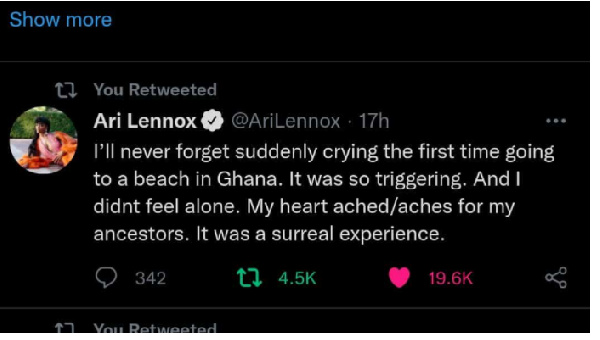 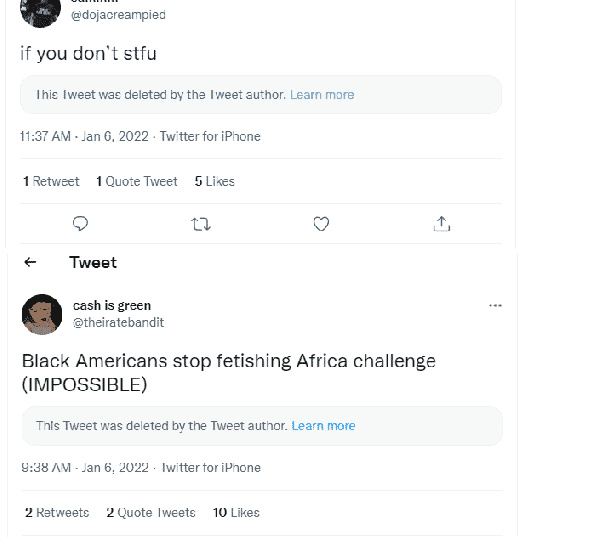 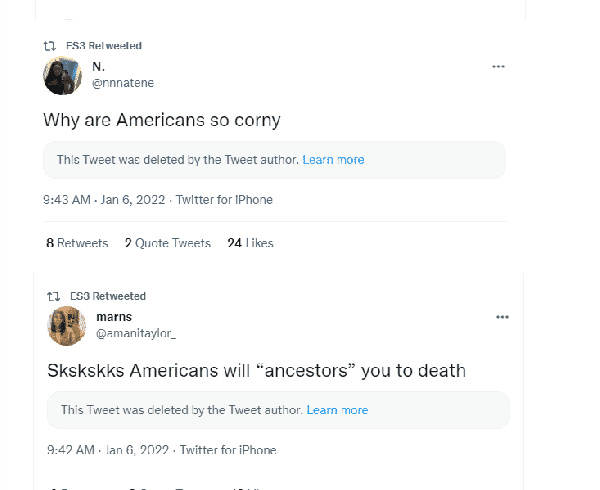 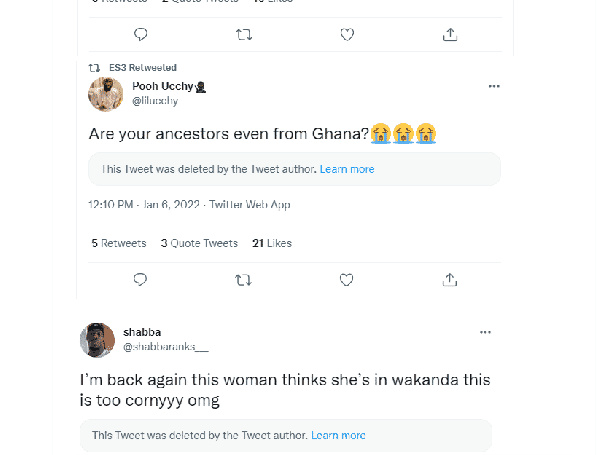 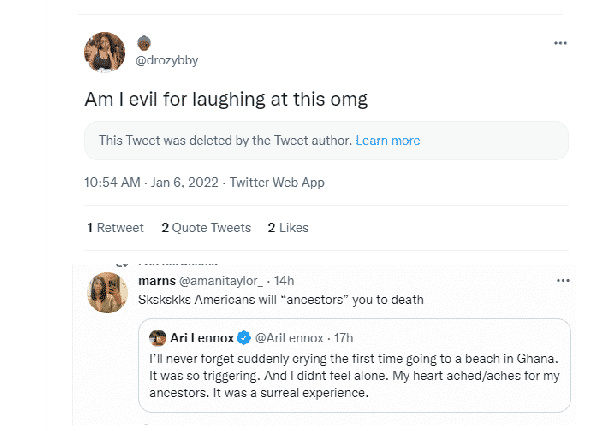