The Asankrangwa Divisional Command of the Ghana Police Service is pursuing leads for the arrest of a grader driver whose recklessness had cost the lives of two people. Four others are reported to have sustained varying degrees of injuries from an accident that was caused by this unidentified driver.

A local reporter from the community, Kaakyire says the incident happened last night around the Municipal Office of the National Health Insurance Scheme. The grader per an account by a surviving victim, Kojo Jackie was speeding downhill with just one headlight in the dark.

Two pragya loaded with passengers got crushed by the grader killing two nurses instantly and left four other injured. Kojo Jackie who claimed to be a local cab driver said he foresaw the danger and quickly jumped out of the pragya to save his life. 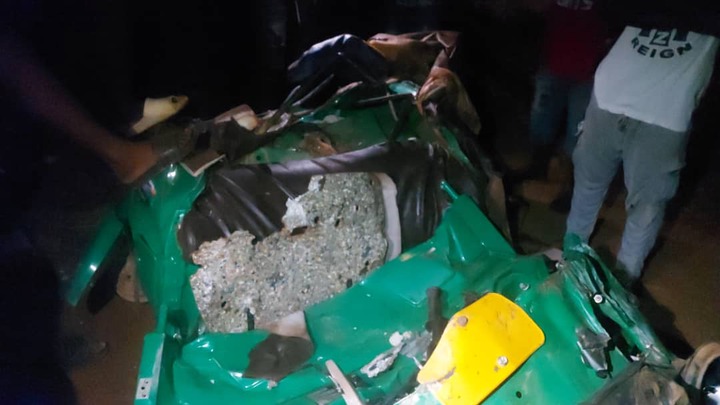 He mentioned that none of the drivers of the pragya perceived the danger because they were blinded by the light from the grader. He told Kaakyire that he suspects the driver to be a worker of the local assembly, given that that equipment had been used frequently for assembly projects.

According to him, the driver of the grader after crushing them stopped his engine and bolted without offering any help to the victims of the accident. Residents who heard of the clash and screams from the scene rushed to rescue some.

The metal scraps had cut deep into the flesh of some victims. Some had cuts on their scalps, chest, thigh, abdomen and bruises all over. All six victims the deceased were transported to the Catholic Hospital.

Dr Emmanuel Ankama who attended to the surviving victims of the accident said they had managed to stabilise them. He prayed that their conditions would get better soon.

He added that his colleague doctor had confirmed the death of the two nurses and their bodies have been delivered to the morgue for processing. According to some witnesses those nurses were students of the Asankrangwa nursing and Midwifery College.