Kwadwo Abrefi, 24, has been found after spending five hours in water. Kwadwo found this morning, was unconscious with no life but hospital officials of the Goaso Municipal Hospital, confirmed him alive after he was rushed to the hospital at half-past six this morning.

Speaking on his condition, Dr Simon Aboagye, the inward doctor who confirmed Kwadwo Abrefi alive, explained that, his condition would have been worse if the family had waited for long or had sent him directly to the mortuary. Cases like that of the patient, are not something new, and neither are they curses.

It’s a health crisis that can be treated but being ignorant and blaming the gods, can lead to a chronic condition. Neurological conditions, stress, fever, and migraine causes all these scenarios of a person walking in their sleep. It is curable and we will work on that after he is back from a coma. 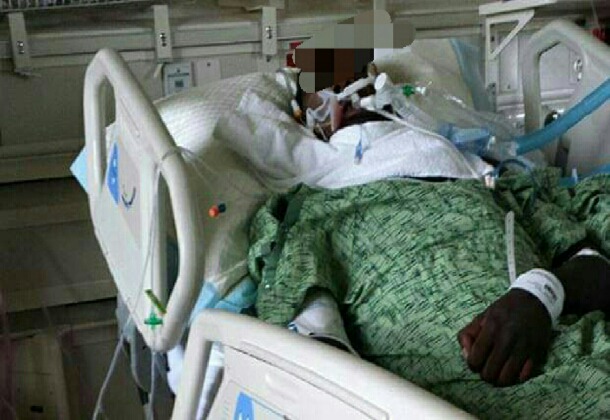 He has been stabilised and we are waiting for him to respond so we can give him a booster to wake him up. He will not die because of the swift response the family took in bringing him directly to the hospital.

If they had confirmed him dead as most family does under stress, he would have been killed at the mortuary unattended to. We need to educate people on the need to have a medical examination before confirming a person is dead. The family has done well and needs to be praised. Their actions saved the victim, Dr Simon Aboagye of Goaso Municipal hospital shared.

The family of Kwadwo Abrefi, in tears had thought their son and brother was dead but upon reaching the Goaso Hospital, Kwadwo was confirmed alive. The father of Kwadwo, Daniel Abrefi, was in his chambers praying when his youngest daughter called his attention to the disappearance of Kwadwo.

Dad I can’t find Bra Kwadwo, Ama Abrefi, the younger sister of Kwadwo said to her father before a search party was released on the streets of Akrodie at 1:00 AM. The family had given up the search when some suggested they visit the mainstream, River Die.

Fortunately for the family, Kwadwo was laying on the bank of the river after falling into the river. We thought he was dead and that brought about the tears and the wailing. We had no idea he was alive because there was no life in him during the rescue.

He has a disorder, and we make sure to get him closer to the family every night so he won’t fall victim to death because of his condition. He was walking while asleep and may have not known he was walking to the river, the father, Daniel Abrefi explained after Kwadwo was rescued from the river.

Kwadwo despite being in a coma has been confirmed to be doing well by health officials of Goaso Hospital and will recover in a day or two.

Opera News is a free to use platform and the views and opinions expressed herein are solely those of the author and do not represent, reflect or express the views of Opera News. Any/all written content and images displayed are provided by the blogger/author, appear herein as submitted by the blogger/author and are unedited by Opera News. Opera News does not consent to nor does it condone the posting of any content that violates the rights (including the copyrights) of any third party, nor content that may malign, inter alia, any religion, ethnic group, organization, gender, company, or individual. Opera News furthermore does not condone the use of our platform for the purposes encouraging/endorsing hate speech, violation of human rights and/or utterances of a defamatory nature. If the content contained herein violates any of your rights, including those of copyright, and/or violates any the above mentioned factors, you are requested to immediately notify us using via the following email address operanews-external(at)opera.com and/or report the article using the available reporting functionality built into our Platform
See More

African Development Bank will not be defined by mischief makers, lies—President