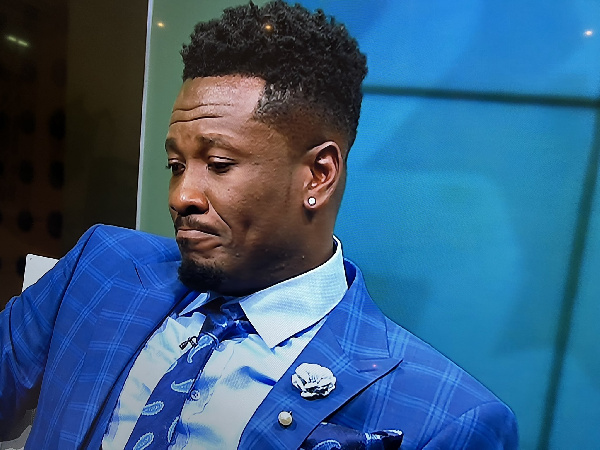 Black Stars legend, Asamoah Gyan was teary while discussing Ghana’s disappointing draw against Gabon in the African Cup of Nations on Friday, January 14.

Gyan, who was doing his punditry job for Super Sports had teary and reddish eyes during the post-match analysis.

Captain, Andre Ayew put the Black Stars in the lead against the Panthers after 28 minutes of action.

But a 90th minutes goal by substitute Jim Allevinah draw Gabon level and thus earned the Panthers a vital point in the Group C fixture.

Speaking after the match, Ghana’s all-time top scorer could not hide his disappointment.

“I’m upset! This (draw) is a loss to us. We (Ghana) should have won this game.” He said on Super Sports

“I’m not happy, we deserved the three points but I think we lost a bit of concentration and conceded a goal in the last minute. We cannot keep on conceding goals in the latter stages of the game,” he added.

Ghana following the draw will need a win against Comoros in their last group game and hope to qualify for the last 16 stage as one of the best third-place teams.

The Black Stars will play the debutants on Tuesday, January 18.

.@ASAMOAH_GYAN3 it’s obvious he cried when the Gabon goal went in #AFCON2021 pic.twitter.com/3gh0bEChzN