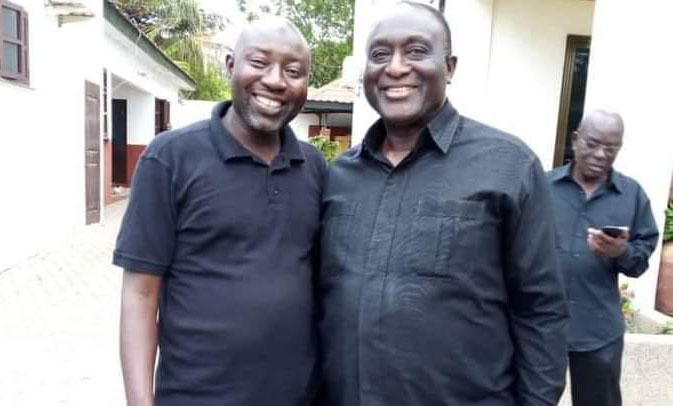 The two were suspended for allegedly defying directives of the regional Chairman of the New Patriotic Party, Mohammed Baantima Samba to members to desist from all media engagements to campaign for flagbearer hopefuls.

According to the collation youth groups, the Deputy General Secretary of the party, Mr. Obiri Boahen, the Northern Regional Executives led by chairman Samba, the first Vice regional chairman of Ashanti, Mr. Kwabena Nsenkyire, the Member of Parliament for Karaga Hon Amin Anta, the Member of parliament for Tolon Hon Habib Iddrisu and Hon Farouk Mahama, MP for Yendi, Hon Hassan Tampuli MP for Gushegu and other high–ranking members of the Party have openly declared support for the Vice President, Dr. Alhaji Mahamud Bawumia.

“These actions violate the code of conduct recently announced by the General Secretary and yet none of these high officers of the Party has been called to order. We were therefore gravely shocked to hear that Choggu West Electoral Area Coordinator, Dawuda Jentuma and Alhaji Ibrahim Kaleem, a member of the Northern Regional Communication Team have been suspended indefinitely with a flimsy excuse that they supported the bid of the Trade and Industry Minister Hon Alan Kwadwo Kyerematen on Radio Tamale. You chose your candidate and publicly declared your support for him but if other people try to stand their ground and protect their own, they are either immediately rounded up by security agencies or subjected to acts of intimidation.”

They noted that such acts of bias application of the party’s rules and regulations must certainly be of concern to any true member of the party hoping for victory in 2024.

The Collation Secretary, Mr. Salifu Abdul Wadud, called on the NPP leadership to intervene and stop the destruction of the party so that the party can be united to break the 8 in 2024.

“ The indefinite suspension of our dear Coordinator is unfair, it’s erroneous, it’s wicked, and is anti-NPP. We, therefore, appeal to the leadership of the NPP to rescind that decision for the sake of justice, peace, and harmony in the party.

Our Electoral Area Coordinator has served the NPP with lots of dedication, commitment, and handwork for decades now and we in the electoral area appreciate him so much. He is a true definition of NPP in Choggu West Electoral Area and we cannot afford to lose his services in the area.”