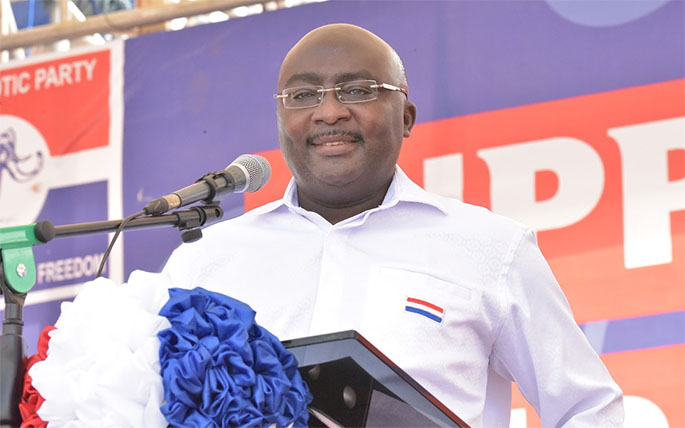 VICE PRESIDENT Dr. Mahamudu Bawumia says Africa is now in a better position to reduce its trade informality by coming together to provide the required integrated payments infrastructures and systems.

According to him, inadequate trade related infrastructure on the African continent and under-developed cross-border payment and settlement systems as well as settlement in foreign currency have culminated in persistence of informal trade in the Sub-Sahara Africa region.

Speaking at the commercial launch of the Pan-African Payment and Settlement System (PAPSS) in Accra yesterday, the Vice President said, “As you are all aware, the underlying motive behind our integration scheme is the expectation that, through collaborative efforts, participating countries in the integration programmes would generate maximum socio-economic benefits for their citizens in the sub-region.”

Regional integration, he indicated, is undoubtedly an efficient tool for overcoming the constraints imposed by the nature and size of individual national markets.

“It has been realised that if production of goods and services is carried out in an enlarged regional economic space, there is a greater chance of achieving substantial economic benefit,” he stated.

Dr. Bawumia, who bemoaned the low intra-African trade, said available trade statistics provided by the African Union in its Annual Trade Report of year 2020 indicated that Intra-African trade remained at an average of 13% for intra-imports and 20% for intra-exports over the last seven years.

“Though the share of intra-exports trade increased slightly from 18.2% in 2013 to 19.6% in 2019, the value of total intra-African exports declined during the same period,” he noted, adding, “these trade payments and relationships are also characterized by settlement involving foreign exchange use which sometimes put pressure on African currencies coupled with issues relating to speed of transactions, convenience and high cost of these transactions.”

“Africa has some 54 countries, 42 currencies, and four exchange rate systems in operation. Most of the currencies are characterized by illiquidity and lack of convertibility and this discourages intra African trade,” he pointed out and added that “it is this reality that has resulted in a call for a common African currency since 1963 to facilitate trade inter alia.”

“Over the years, there has been tremendous emphasis by central banks on the development of domestic payments systems such as such as Real-Time Gross Settlement (RTGs), Automated Clearing House (ACH), Securities Settlement System (SSS), Automated Check Processing System and a National Switch, etc.”

Chief Executive Officer of PAPSS, Mike Ogbalu, said a prosperous continent was a trading continent; one that built and retained wealth from its goods and services.

For him, governments, businesses and individuals consumed goods and services which they obtained in exchange for value, and continued that the fundamental means by which value was exchanged or traded was through payments.

Mr. Ogbalu said at a continental level, establishing an efficient payment infrastructure that would facilitate transactions from Cape Town to Cairo and from Dakar to Dar-es-Salaam will go a long way to eliminate the artificial borders that have divided the continent and robbed individual countries of their shared prosperity.

He acknowledged that payment infrastructure had existed at both national and sub-regional levels for a while, he pointed out that “these systems, however, lack interoperability, fragmented national and regional payment systems cannot stimulate Pan-African economic development and intra-African trade at the pace required to significantly increase the percentage of trade amongst African countries.”

“While these national and regional payment systems have made a good start, bringing about significant modernization within their jurisdictions, it is paramount that we now integrate all of Africa financially to hasten the pace of economic growth in the continent,” he asserted.

Secretary General of AfCFTA Secretariat, Wamkele Mene, said following the successful piloting of the system, the AfCFTA Secretariat would continue to strongly support Afreximbank, as PAPPS was being rolled-out to the rest of the member states of the AU in order reduce the cost of cross-border payments and to boost intra-Africa trade.

He wants Heads of States and Government to commit to providing political impetus to ensure that all members of the AU switch onto PAPPS.

According to him, in the midst of these, Heads of States of AU took the bold decision to commence trading under the very difficult conditions that were caused by COVID-19.

“Since the commencement of trading under the AfCFTA on 1st January, 2021, significant improvements have been recorded in other key aspects of the implementation of the agreement,” he asserted.

He said there had been an increase in the number of AfCFTA State parties from 35 (64%) in December 2020 to 39 (73%) at the end of last year; improvement in the agreement on the AfCFTA rules of origin from 81.8% to 88.6%; and also activation and operationalisation of the Dispute Settlement Body (DSB), a key pillar in the successful implementation of PAPSS.