Private sector urged to familiarize with rules of origin within AfCFTA 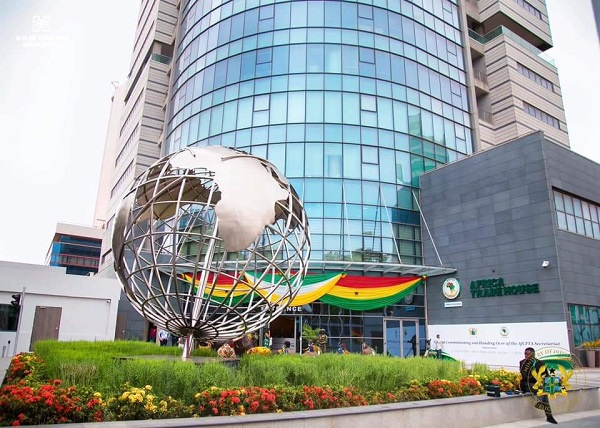 The AfCFTA Secretariat is located in Ghana-West Africa

International trade experts, Appiah Kusi-Adomako and Dode Seidu, have called on the private sector to familiarize themselves with the rules of origin regime under which AfCFTA trading is permitted.

According to them, adequate knowledge of the rules of origin would help manufacturers and traders in the private sector position themselves adequately to benefit from the free market.

Rules of origin are, in international trade, legal standards supporting the differential treatment of some products based on their country or region of origin.

In the case of the African Continental Free Trade Area, because party states have made substantial tariff concessions that hitherto, were key contributors to national revenues, the experts say rules of origin are of utmost essence for intra-regional trading.

Speaking on Eye on Port, the Country Director of CUTS International Accra, Appiah Kusi-Adomako, stated that subjecting goods under the lens of rules of origin enables party states to detect goods not permissible under the AfCFTA agreement.

“For example, goods could be imported from China into an African country without any substantial value addition, but just labeling and repackaging. Such goods when exported to another African country could be disguised as originating. So, the rules of origin avoid that from happening,” he cited.

Mr. Kusi Adomako overemphasized the importance of the private sector understanding the tenets of the rules of origin so they can position themselves for success under the AfCFTA.

He said, “AfCFTA has allowed us to export to a wide market duty-free, quota-free. When you learn and understand the rules and their dynamics, it would help you know where you source your raw materials from, and what kind of processes you need to add to it to qualify for export under AfCFTA without any tariffs when it gets to a party state.”

Taking his turn on the subject, Dode Seidu, an AfCFTA Consultant with Frontier Market Advisors, asserted that rules of origin have become very important for regional value chain development.

He explained that “there are some industries that may find it beneficial to locate aspects of their processes in different countries within the AfCFTA territory. One of the principles of AfCFTA is what we call cumulation.

The rules of origin consider the whole of Africa for countries who are parties as one area. This means that if I source parts of my products from different parts of Africa who are party states, those products will qualify as originating.”

“This means that I can establish a factory in Ghana, and source some of my products and inputs from Kenya, South Africa, put it back together, and export it back to South Africa or Egypt for example and it would still qualify as originating.”

The AfCFTA consultant however noted that the rules of origin are quite complex to grasp without proper consultation.

He educated that the rules of origin are determined by two major categories: the wholly-obtained criteria and the substantial transformation criteria.

For wholly-obtained criteria of rules of origin, the product in question would have to be either originating from one country or should be naturally occurring, grown, or raised in one country.

He said substantial transformation criteria require that products that have parts or elements from another country, must have been processed, manufactured, or assembled in a way that its characteristic is altered.

He added that there are four sub-criteria under this category namely, value addition, the value of non-originating material, specific works, and change in tariff heading.

Mr. Seidu disclosed that information on the African Continental Free Trade Area including various rules of origin and tariff breakdowns is published by Customs on the ICUMS website.

He also said, with the Customs Division of the GRA acting as the designated competent authority for implementing the rules of origin in Ghana, application for the certificate of origin can also be applied for using the ICUMS website.

The AfCFTA expert indicated that the certificate of origin is prerequisite to enjoying the benefits of AfCFTA during exports hence producers and traders should ensure to acquire one on products that would be traded under the AfCFTA.

The trade experts acknowledged the zeal and preparation processes embarked on by party states in readying their industries for the free market.

Mr. Dode Seidu, the AfCFTA Consultant with Frontier Market Advisors admonished leaders of party states to demonstrate the sustained political will to support the trade.

He emphasized that it is only by political will that non-tariff barriers such as systemic issues, lack of harmonizing working hours between border institutions, delays, etc will be eradicated.