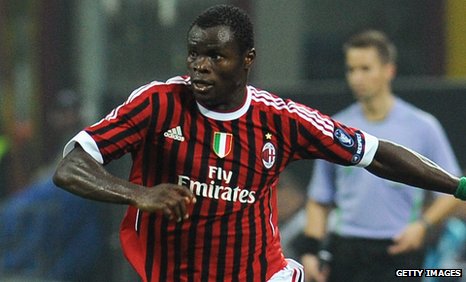 Taiwo only joined Milan from Marseille in the summer

QPR have completed the signing of AC Milan defender Taye Taiwo on loan until the end of the season.

The 26-year-old was also a reported target for Arsenal but opted to join boss Mark Hughes at Loftus Road.

The Nigeria international only signed for Milan from Marseille in the summer and has made only four starts for the club.

Taiwo is the first signing Hughes has made since replacing Neil Warnock as manager a fortnight ago.

Speaking to the club website, Hughes said: “I have known of him for a long time and admired him from afar.

“To get him now is a fantastic coup and a real statement of intent that we can attract the quality of player that he is. I am looking forward to working with him.”

Taiwo, who will wear the number 34 shirt, added: “It’s a new and exciting challenge for me and one I am very much looking forward to.

“I know only hard work, good performance, dedication, and passion will connect me with the fans but I’m prepared.

“I’m looking forward to what lies ahead and I’m prepared to give my all to the QPR cause.”

QPR had been hoping to sign Chelsea defender Alex but a deal for the Brazilian broke down because the player failed to agree personal terms.

Rangers were also thwarted in their effort to sign Henrique on loan from Santos but a move for the Brazilian striker collapsed because his application for a work permit was turned down.

Rangers have also been linked with a move for Manchester City defender Nedum Onouha but after seeing his side beat Wigan 3-1 on Saturday Hughes has admitted he is wary about affecting the “spirit and character” of his squad.

Hot legs! Miley Cyrus heats up Twitter as she posts a...