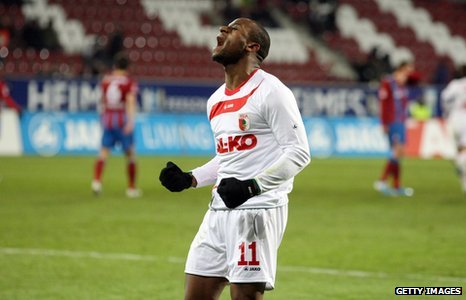 Angola must do without striker Nando Rafael for their opening 2012 Africa Cup of Nations fixture against Burkina Faso on Sunday.

The Angola Football Federation (FAF) only began the official process with Fifa to enable Rafael to play on Friday, 48 hours before their opener.

He played for Germany’s under-21’s and needs permission to swap allegiances.

“We have [now] made the request to Fifa,” FAF communications director Joao Lusevikueno told BBC Sport.

“Fifa asked us to send his birth certificate – which we did on Wednesday.

“It’s something we are trying to sort out and we have someone working full-time on the process.”

However, the Angolan delegation had not heard anything back from Fifa by Saturday morning, meaning Rafael will miss the opening Group B clash against the Burkinabe in Malabo.

Despite the delays, the FAF is not preparing to replace Rafael.

“We are very confident we [will] have Nando Rafael in the team,” Lusevikueno replied when asked about possible replacements.

Fifa told BBC Sport on Monday that it has not recieved an official request from the FAF for Rafael’s swap, adding it could not say how long the process could take.

However, one good piece of news came when the German Football Federation told BBC Sport that it has sent off the letter necessary to help complete Rafael’s switch of allegiance.

Angola begin their Group B campaign against Burkina Faso on Sunday, before games against Sudan and tournament favourites Ivory Coast.