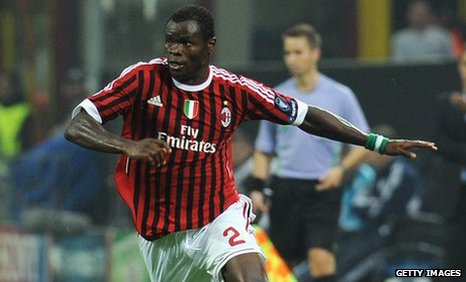 Taiwo could be one of two imminent new arrivals at QPR

Taye Taiwo has vowed to make a quick impact at Queens Park Rangers when his move from AC Milan is completed.

The Nigeria defender claims a six-month loan deal has been agreed between the clubs, while Rangers say the transfer is “very close”.

“I’m happy with the opportunity to play at QPR,” Taiwo told BBC Sport.

“I don’t know if there are professional footballers who just love to pick up monthly salary by sitting on the bench. I’m not in that category.”

The 26-year-old has started only seven games since moving from Marseille to Inter Milan last summer.

“I need to settle down quickly and adapt to the rhythm that comes with playing in England,” he said.

“I know only hard work, good performance, dedication, and passion will connect me with the fans but I’m prepared.

“I had an injury setback when I got to Milan and the negative impact was unpleasant.

“I’m looking forward to what lies ahead and I’m prepared to give my all to the QPR cause.

“It is not how long you stay at a club but the positive impact you make and I hope to bring all the positivity as a professional footballer.”

Taiwo was linked with a January move to Arsenal but now appears almost certain to join QPR, subject to a work permit.

He was pictured with manager Mark Hughes on Twitter on Thursday, and QPR confirmed they are “waiting for everything to be put into place before we make an official announcement”.

Club captain Joey Barton welcomed Taiwo’s arrival on the social networking site: “Was very good when I seen him for Marseille.

QPR manager Mark Hughes revealed on Thursday that there are “still conversations going on” with Chelsea defender Alex.

The Brazilian, 29, has been told he has no future at Stamford Bridge after handing in a transfer request.

Rangers sources said on Saturday that a deal had been agreed after an improved bid, but Hughes refused to confirm or deny reports.

Meanwhile, QPR are still waiting for a work permit work permit for Brazilian striker Henrique, who has agreed to sign from Sao Paulo.