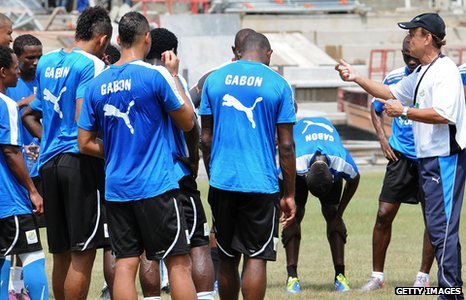 Gabon head coach Gernot Rohr has insisted that his players are coping with the pressure of being co-hosts of the Africa Cup of Nations.

The Panthers begin their campaign in Libreville on Monday against Niger, who knocked out Egypt and South Africa in qualifying.

And Rohr has told his squad to treat the match like “a final”.

“To win against Niger could be a real beginning for our team, for our country,” he told BBC Sport.

“If we could win this game it really would be a movement in the country and would take away all the doubts we can have after two years of friendly games.”

Ahead of the tournament – which starts on Saturday in Bata, Equatorial Guinea – the Gabonese Football Federation (Fegafoot) set Rohr the ambitious target of winning the trophy.

But Rohr believes that his squad can handle the expectation.

“The pressure is normal, when you work with football,” he said.

“Everybody wants to win it. We must come out of the group.

“The people here are ready to be a real twelth man for the team.”

The Gabon head coach also feels it would be wrong to underestimate Niger, who are making their first appearance at the Africa Cup of Nations.

“Niger are a very agressive team, one of the most physical teams.

“They won against South Africa, they eliminated Egypt, so when you have these results you really must say this is a strong team.

“For me it’s perhaps the best group.

“Morocco has a wonderful team. I know Tunisia because I worked there. I know these players.

“On paper they are better than us because we don’t have as many professionals but on the pitch we will see.”

Gabon have selected 14 of the 23 players who were at the 2010 finals in Angola, where they were eliminated in the first round.