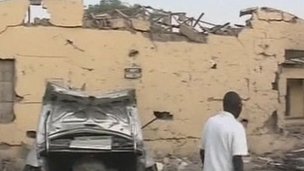 Several people are reported to have been killed in a series of co-ordinated explosions in the northern Nigerian city of Kano.

Police stations and the regional police headquarters were among the targets. Gunfire has also been heard in several locations.

The militant Islamist group Boko Haram says it carried out the attacks.

The group has been behind a recent campaign of violence in the mainly Muslim north.

Authorities in Kano state have imposed an immediate 24-hour curfew.

Reports from officials and witnesses indicated that at least seven people had been killed in about six explosions.

A doctor at Aminu Kano Teaching Hospital told the BBC that at least five dead bodies had been brought in.

The BBC’s Yusuf Ibrahim Yakasai in Kano says there was panic in the city as plumes of smoke rose into the sky.

Our reporter says that as well as the regional police headquarters in the west of the city, police stations near the centre and the south were targeted.

Another witness told the BBC that one of the buildings hit was the offices of the secret police – the State Security Service (SSS) – in the east of the city.

A doctor told the BBC that some of the wounded included foreigners from an area near the SSS headquarters, where many expatriates – particularly Lebanese and Indians – live.

There has also been a shoot-out at the headquarters of the state police in the city’s eastern district of Bompai, reports say.

A witness told the BBC’s Hausa Service he was with a group of Christians and Muslims taking refuge in a mosque near the gun battle.

The man – a visitor to the city – said they were lying on the floor, praying together and had turned off the lights. He said his hearing was still affected by the blasts.

One witness told Nigerian television he rushed outside after hearing four explosions.

“On my way out I saw a dead body, a young man lying dead, and then I proceeded further towards the immigration office.

“That was really where the first bomb blast started. There were three dead bodies right there in front of the immigration office and now we also had… several bomb blasts, gunshots… in front of the police station.”

Another local man, Andrew Samuel, said: “I was on the roadside and I just heard a ‘boom’. As I came back, I saw the building of the police headquarters crashing down and I ran for my life.”

A reporter for the AP news agency said one of the explosions was powerful enough to shake his car several miles away.

Witnesses said the bomber who attacked the police headquarters pulled up outside the building on a motorbike, dismounted and ran inside holding a bag.

Nigeria’s Channels TV said one of its reporters, Enenche Akogwu, had been killed in the attacks.

It said he had been “shot by unknown gunmen suspected to be members of the Boko Haram sect”, outside the state government house.

Police and military roadblocks were put up across the city within minutes, officials told Reuters.

Boko Haram, whose name means “Western education is forbidden”, has said it carried out the attacks.

A spokesman for the group, Abul Qaqa, told journalists in the north-eastern city of Maiduguri, the group’s base, that it had carried out the attacks because the authorities had refused to release members arrested in Kano.

The group wants to establish Islamic law in Nigeria. It started to stage drive-by shootings in 2010 on government targets in Maiduguri.

Analysts say this is one of Boko Haram’s largest simultaneous attacks, and certainly its largest assault on Kano.

It stepped up its attacks in 2011, targeting police headquarters and the UN in the capital Abuja.

In recent weeks, southerners, who are mostly Christians or animists, living in the north have been the targets of deadly attacks.