BY JIMITOTA ONOYUME
PORT HARCOURT:    The next senatorial elections by the In dependent National Electoral Commission’s calendar for Rivers state will be in 2015.  But surprisingly the battle over who clinches the Rivers East Senatorial seat come 2015 has become fierce in the state.

The battle is mainly between Governor Chibuike Amaechi and the Minister of State for Education, Bar Nyesom Wike.  They are both of the same Ikwerre ethnic group, in the same senatorial district and of the same ruling Peoples Democratic Party.
While the governor is from Ubima in Ikwerre LGA, the Minister is from Rumuo Epirkom  in Obio Akpo local government. 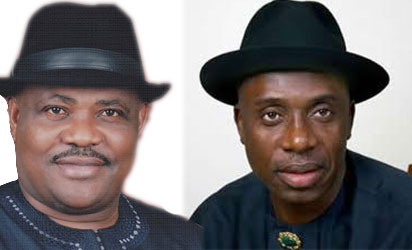 Already their aspirations have started generating serious political tension in the state.  Last week,  Amaechi  suspended 11 LGA chairmen indefinitely  for allegedly coming late to a meeting slated, according to the Commissioner of Information, Mrs Ibim Semenitary to discuss how the state should tackle challenges that arose from  the sudden withdrawal of fuel subsidy. He further swore in their deputies as Acting Chairmen, an act that was later ratified by the state House of Assembly.

Though out of  the 11, only about  four local governments are in the Rivers East senatorial district but sources within the  governor’s political camp said it was a move to  firmly position the governor in the  emerging political  re engineering and alignments  in the state.

According to the sources,   there were feelers that majority of the affected chairmen sometime last year attended a meeting convened by the Minister Nyeson without clearance from the governor.    The source said the governor merely used their lateness to his recent meeting as an excuse to nail them for attending that meeting convened by his political rival.

How true the foregoing was remains an issue of speculations.   But observers of political events in the state said if the suspension of the chairmen had to do with their lateness to the meeting the governor had, then it was like using a sledge hammer to kill a fly.

Also last week,  the governor swore in 15 Special Advisers, two Commissioners and a Chief of Staff for Government House.  Some within the PDP in the state believed that the choice of the Chief of Staff, Mr. Tony Okocha was to further whittle down the political influence of the Minister, Bar Nyesom.

It is the opinion of some that the Minister seems to have more grassroot advantage within the PDP.  And it was probably because of this that he emerged Director General of Amaechi Re election campaign while the governor ran for his second term in office.

It would be recalled that Amaechi and Nyesom struck an understanding while the latter was Chairman Obio Akpo local government and the former was Speaker of the House of Assembly.  Nyesom was firmly with Amaechi  when he battled to reclaim his mandate from deposed governor Celestine Omehia. Probably, his unwavering support for Amaechi resulted in his appointment as Chief of Staff during the first term of the governor.

As Chief of Staff, Nyesom was apparently very powerful and influential in the political structure.  Some party stalwarts described him then as the only aide of the governor that could reverse the governor’s order without consulting with the governor.

Shortly after Amaechi was sworn in as governor for his second term, Nyesom became Minister of State for Education.   Some in Nyesom’s camp held that the governor merely recommended him for appointment as a Minister and left him to push for his confirmation. But those on the side of the governor maintained a different view.

They said the governor did not at any time abandon Nyesom after he recommended him for the appointment.  In the opinion of many, the PDP should act fast to reconcile these two political giants in the state for the party to remain a cohesive force.