Frank Lampard scored a last-gasp winner as Chelsea secured a first win in five matches with a gutsy and much-improved display against Wolves at Molineux.

Stephen Ward seemed to have earned the hosts a point when he smashed Steven Fletcher’s cross low into the net.

But Chelsea, who led through Ramires’ strike, won it when Lampard volleyed in Ashley Cole’s brilliant cross.

Kevin Doyle almost snatched a point in injury time but his header was superbly saved by Blues keeper Petr Cech.

It was a spectacular save and a fitting way to finish off a pulsating match that Chelsea will feel they fully deserved to win.

McCarthy ‘livid’ after defeat by Chelsea

The hosts had two spells in either half where they rattled the visitors and had they not wasted two stunning chances in the latter stages of the first period, they would probably have avoided a fifth home league defeat of the season.

But Chelsea dominated possession and showed signs of the unity that many had doubted existed in their dressing room with a disciplined, professional performance.

However it was almost a disastrous start as a sloppy Jose Bosingwa pass could easily have gifted Wolves a first-minute opener.

David Jones failed to connect with his effort and Chelsea’s packed midfield then began to get on top. 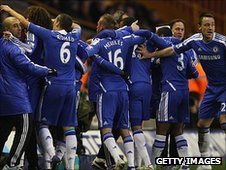 Oriol Romeu, playing in his familiar holding role, laid the defensive platform with Lampard and Raul Meireles deployed further forward and the hosts struggled to get a foothold in the game in the first 25 minutes.

The much-maligned Fernando Torres, back in the side because of injuries to Daniel Sturridge and Didier Drogba, flourished early on and almost set up goals for both Juan Mata and Lampard.

Wolves goalkeeper Wayne Hennessey did brilliantly to race out and block Mata’s strike after a delightful first-time Torres pass, and defender Richard Stearman then did enough to put off Lampard with the midfielder poised to shoot home following another astute Torres through-ball.

An increasingly confident Torres even tried an audacious 60-yard effort on goal after winning the ball on halfway, only for his strike to drift closer to the corner flag than the goal.

Ramires also shot wide and an away goal seemed inevitable but Wolves were awoken from their slumbers by a very clumsy studs-up challenge by Lampard.

The England midfielder could easily have been sent off as he clattered into Adam Hamill, but his obvious attempts to pull out of the challenge and instant apology may have spared him.

Lampard’s caution sparked a nine-minute spell that brought five yellow cards and saw Wolves rattle the Londoners with by far their best spell of the game.

Roger Johnson was desperately unlucky not to open the scoring with a powerful far-post header from Hamill’s fine free-kick.

And moments later Stephen Ward missed the easiest chance of the afternoon, heading well wide from six yards after another excellent Hamill centre.

Chelsea must be unified – Lampard

But as the temper levels dropped off, Chelsea began to boss things again.

Lampard, Bosingwa and Terry all went close before the break and although Hamill saw a decent strike blocked by John Terry, the Blues then went ahead when Ramires reacted quickly to lash the ball into the top corner following Mata’s corner.

Chelsea seemed desperate to grab a second and avoid a nervy finale and a possible fourth 1-1 draw in five games.

Ramires tested Hennessey from wide on the right after showing blistering pace and some Torres trickery almost saw him create a one-on-one chance.

Wolves once again dragged themselves back into the game and appeared to have piled more misery on under-pressure Blues boss Andre Villas-Boas with an 84th-minute equaliser.

Matthew Jarvis crossed to the far post and when fellow substitute Fletcher turned the ball back into the danger area, Ward crashed the ball past Cech.

But Chelsea somehow rallied and Lampard showed typical drive to arrive in the box and steer the ball home from close range from Cole’s inviting left-wing centre.

Live text and data provided by The Press Association.