Senator Saraki told journalist on his arrival from the oil facility which lies 120km southwest of the Niger Delta, in a water depth of over 1,000m with members of the committee that the committee is impressed with what shell has done.

The chairman said “ we just came back from the oil facility of Bonga where the oil toke place and the executives committee saw that a lot of work has been done by shell to curtail the oil spill and they were able to respond because they are up to the task and that is what we expect from other oil companies that are operating in Nigeria”.

“We have also witness a third party oil spill but we cannot say if it from Bonga or not but the third party oil spill has reached the shore line. But we want to appeal the communities that are affected to allow for a proper investigation and test to be carried out in order to ascertain the source of the third oil spill. We want to ensure that as a committee that we bring home the best international standard in dealing with issues like this” he said.

Vice chairman of the committee Professor Ben Ayade noted that oil spills on the shore of the Niger Delta region are not crude, some of them are refine products added that shell has done the right thing and has to be commended for their 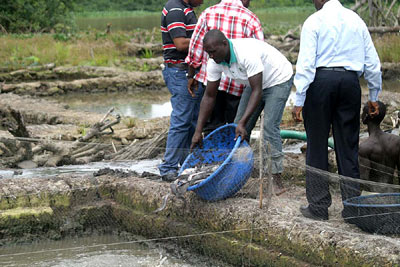 It was earlier reported that The Minister of Environment Hajia Hadiza Ibrahim Mailafia indicated that the Bonga oil spill that occurred on the 20thof December 2011 will require six weeks for a complete clean up.

Mailafia who inspected of the oil spill which lies 120km southwest of the Niger Delta, in a water depth of over 1,000m by the joint team of the ministry, Shell, NOSDRA, Nigerian Maritime Administration and Safety Agency, Nigeria Immigration Service, Nigeria Customs Service and other technical partners said:

“For a complete clean up, we are looking at six weeks and to put things under control. We have brought in experts and we currently have seven vessels, two air craft and two helicopters that are making use of dispersants to clean the massive oil spill at the Bonga deepwater offshore facility and to ensure that the spill does not reach the shore line”.

She also added that shell has been cooperating with the ministry of environment, the National Oil Spill Detective Response Agency (NOSDRA) and the Marine tine Safety department.

Mailafia commended shell for giving out accurate report on the total amount oil spilled (40 thousand barrels of oil) and for their quick response to the spill adding that proper investigation will be carried out to ascertain the cause of the oil spill.

The Minister admitted that the spill will affect aquatic life but effort are in place to ensure that the spill does not hit the shore line adding that the Nigerian Custom and Immigration has been helpful since the incident occurred on Tuesday last week.

Bonga is the first deepwater project for the Shell Nigeria Exploration and Production Company (SNEPCO) and for Nigeria. The discovery well is located in oil prospecting license (OPL) 212, which was awarded during Nigeria’s first round of deepwater frontier acreage awards in 1993.

SNEPCO operates the field on behalf of the Nigerian National Petroleum Corporation (NNPC) under a production sharing contract, in partnership with Esso (20%), Nigeria Agip (12.5%) and Elf Petroleum Nigeria Limited (12.5%).

Crude oil production from the field started in November 2005 and the first shipment from the field was made in February 2006. Production was stopped temporarily due to a militant attack in June 2008 and was resumed later in the same month.